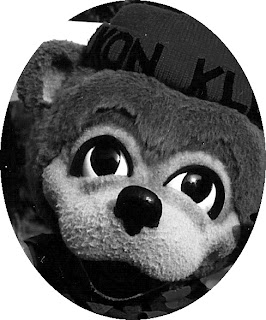 I was in Northern California this past weekend spending time with my girlfriend’s, Katie, family for her  brother’s birthday. Her brother, Peter, is also a DisHead™ (yes, that is a term I just created and traded-marked. You’re welcome) and he shared with me some pictures from their past Disneyland visits. Their family used to go to Disneyland a lot when he and his sister were children.

While I was looking through their photos I noticed a character that I have never seen before: Yukon Klem. They only have two pictures with this character from when they stayed at the Disneyland Hotel in1989. I did some research and talked to Peter about this mysterious character. Here is what I learned.

What I could gather from my research and talking to Peter and Katie is that Klem was a part of the Yukon Follies Revue that was at a restaurant at Disneyland Hotel called Sgt. Preston’s Yukon Saloon. A review from the L.A. Times, from 1991, said that it was a combination of the “Country Bear Jamboree and the Golden Horseshoe Revue”. That sounds like a show I would love. When the show wasn’t going on, Klem would walk around the hotel and take pictures with guests.

*Special thanks to Peter and Katie for sharing their Disneyland Hotel photos and experience.