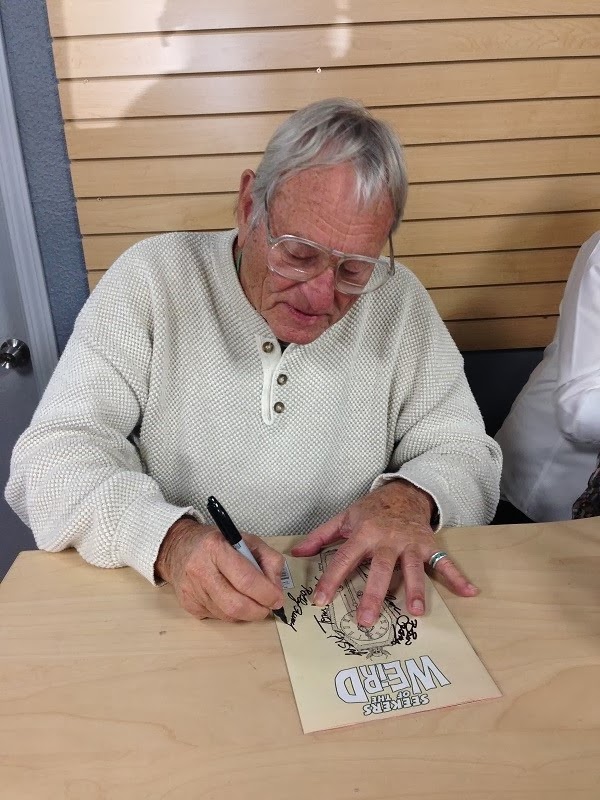 Rolly signing my comic book!
What does all of this have to do with Disney postcards? I’m getting there, just hang on. Like I said I was at this comic shop and somehow in this tiny strip mall in a slightly ghetto part of Anaheim exists THREE comic/action figure/Disney collectible stores. I couldn’t believe it! 13 year-old Guy would have freaked out. Anyway, one of the stores was called My-D Pins & Collectibles. This shop mostly specialized in Disney pins but they also had a nice collection of super hero and movie action figures. The shop was huge but tucked away in one corner was a box that said “POSTCARDS $1 EACH.” As I was looking through I found some gems commemorating the good and bad of Disney theme parks. It was tough only limiting myself to five postcards, but somehow I managed.
Postcard #1: DCA’s Golden Dreams 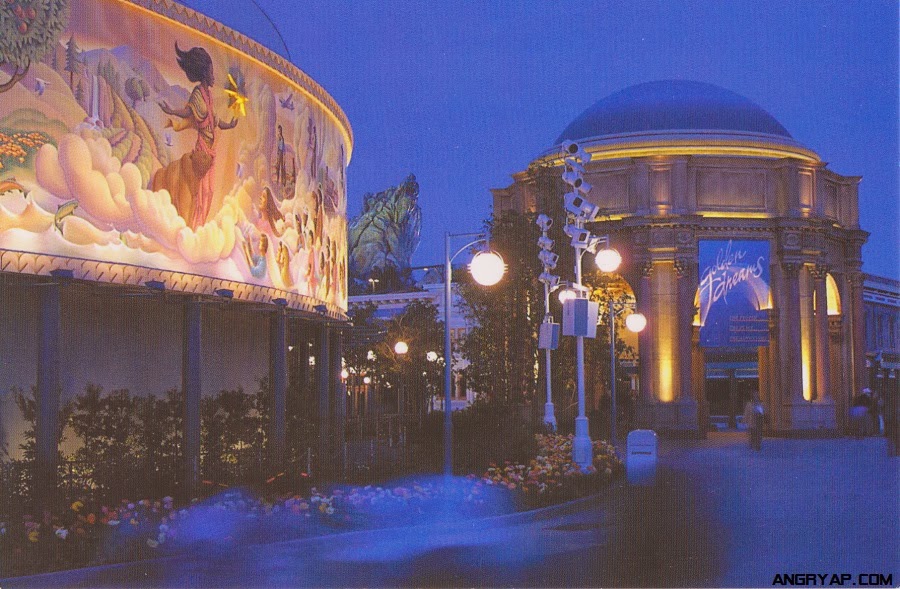 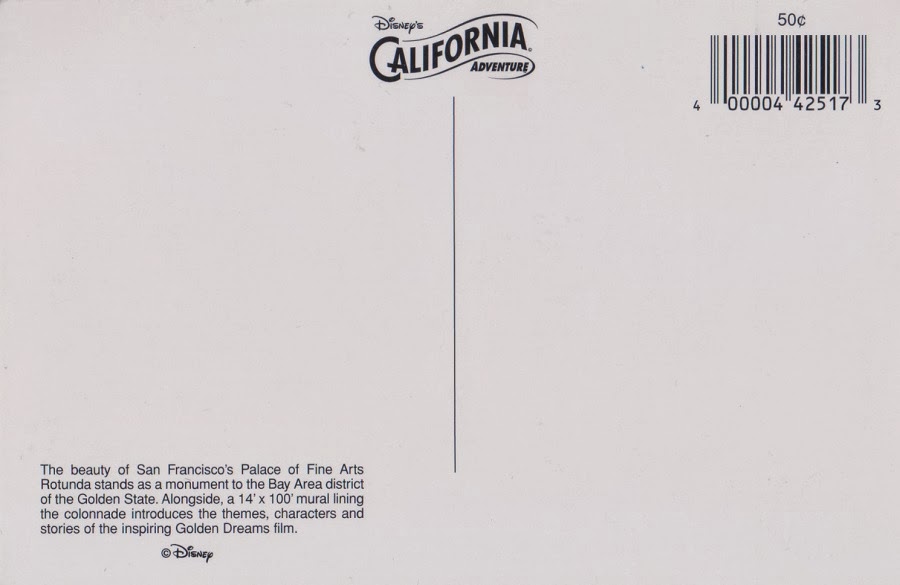 How could I not buy this postcard commemorating a chunk of extinct Disney California Adventure? This card shows the facade of Golden Dreams, which was replaced by Little Mermaid: Ariel’s Undersea Adventure. The rotunda on the right was saved but the rest of the building was completely torn down. This postcard gets bonus points because the rotunda has the banners that do not feature the star of the show, Whoopie Goldberg. In fact, I don’t think the banners on this postcard were ever used in the park. At some point they changed to a banner that actually featured Whoopie because I guess they though seeing a giant banner of her face would get more people in to the theater. You can see what I’m talking about on Yesterland.
Postcard #2: Animal Kingdom’s Countdown To Extinction 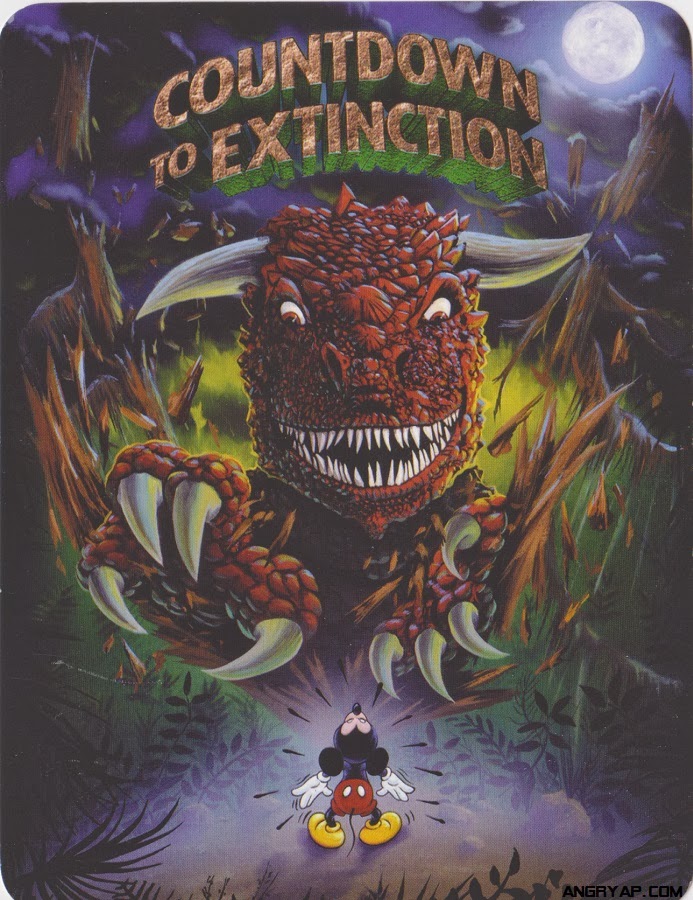 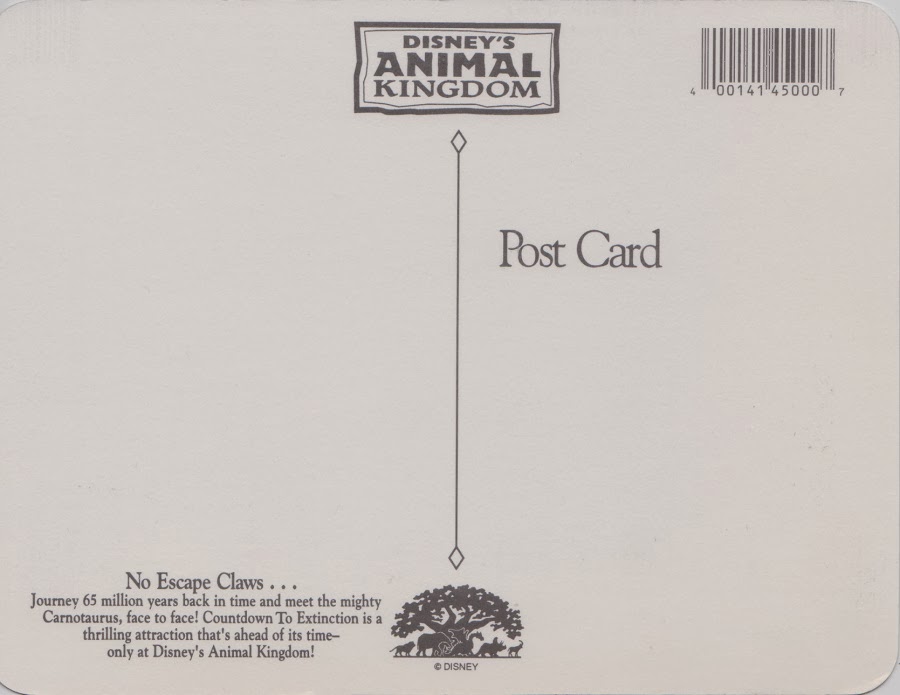 I’ve always been fascinated with Animal Kingdom’s Dinosaur. I mean, I think it’s a fun ride but I’m more interested in its history. Like, why did it open as Countdown To Extinction, but then change its name after a couple of years? Why did Dinosaur get a major theme park attraction when so many other Disney films did not? Besides these questions there are some curiosities about the actual ride itself, like the hundreds of  effects in the ride that haven’t been used for years (Really! Watch Martin’s Ultimate Tribute to see what I’m talking about). Also, have you noticed at the end of the ride your vehicle drives towards a mirror? This was supposed to feature a pepper’s ghost effect of the Iguanodon riding on the back of your Time Rover. One thing I want to point out on the back of this postcard is the pun “NO ESCAPE CLAWS”
Postcard #3: Alice From Magic Kingdom’s The Mickey Mouse Revue 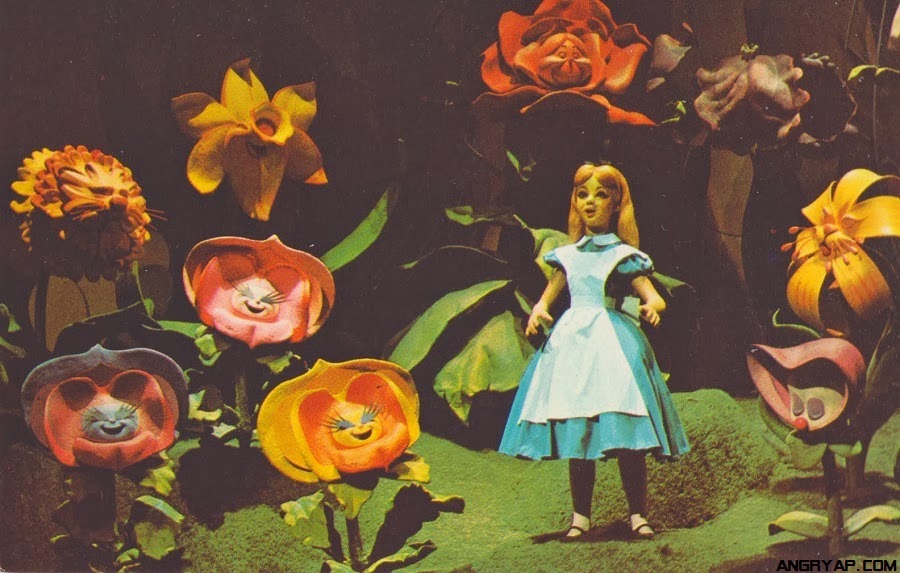 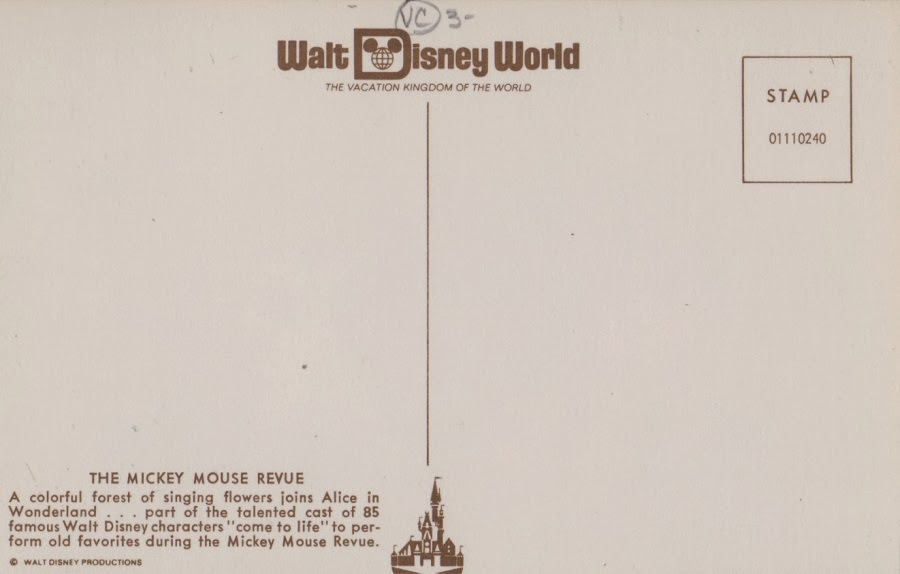 Ok, now we are getting in to the good stuff. This postcard features Alice and the singing flowers from The Mickey Mouse Revue in Magic Kingdom. If you’re not familiar with this show it is basically Enchanted Tiki Room, but with Disney characters. MMR is near the top of my list of attractions that I wish I could have seen before it was retired. The detail on these figures is stunning. Legend has it that in the early 80s when Oriental Land Company was picking what attractions they wanted for Tokyo Disneyland they chose Mickey Mouse Revue. But to save money it was decided that Magic Kingdom’s show would be moved to Tokyo. The Revue lasted all the way up until 2009 when it was closed for Mickey’s PhilharMagic.
Postcard #4: Herb Ryman’s Tokyo Disneyland Concept Art 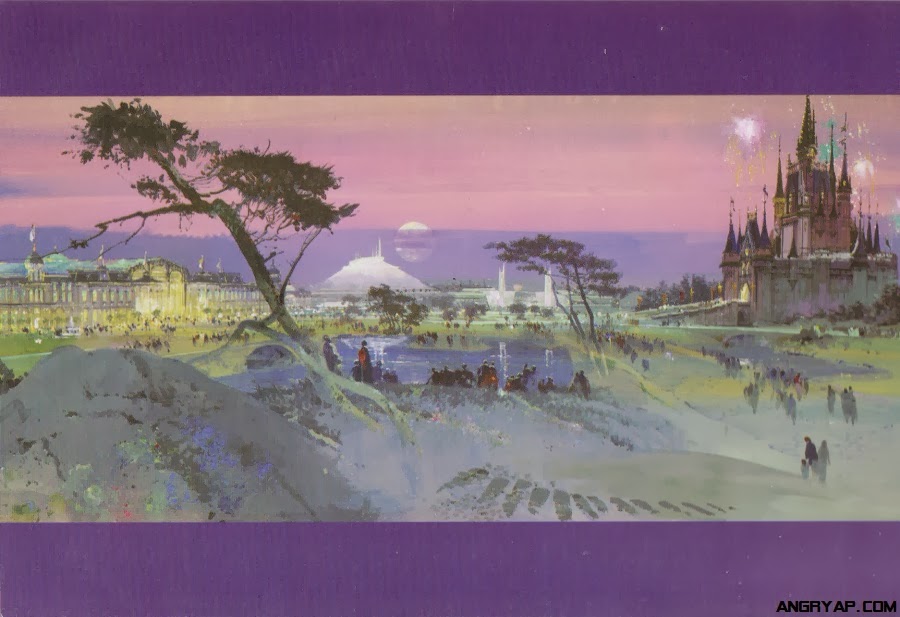 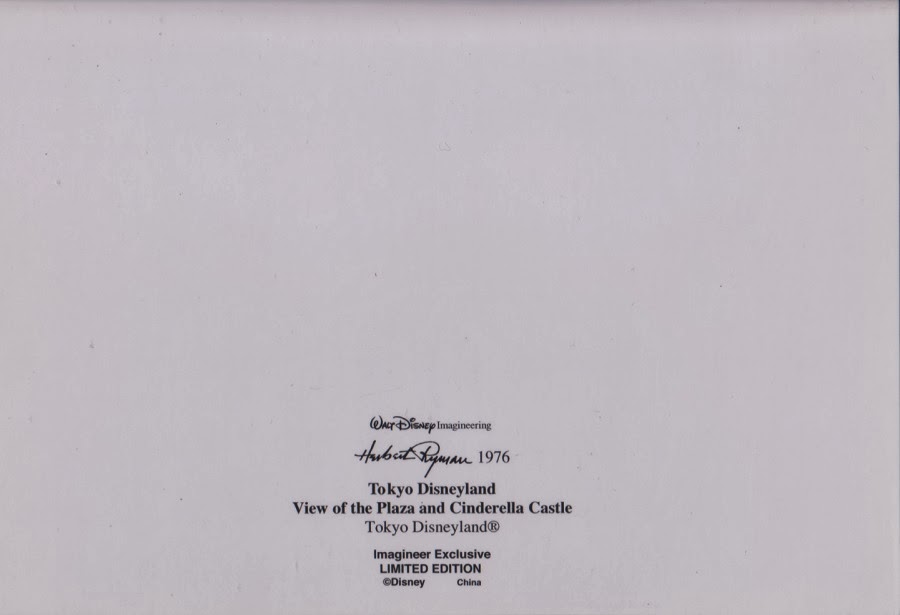 Any words that my feeble brain manages to squeeze out wouldn’t be able to do Herbert Ryman justice. Moving on.
Postcard #5: DISNEYLAND’S MAIN STREET OMNIBUS!!! 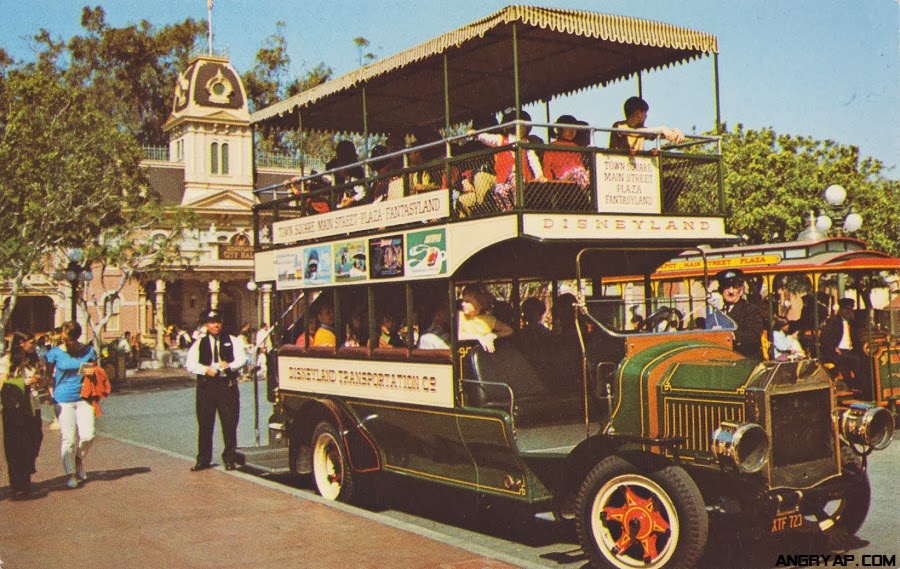 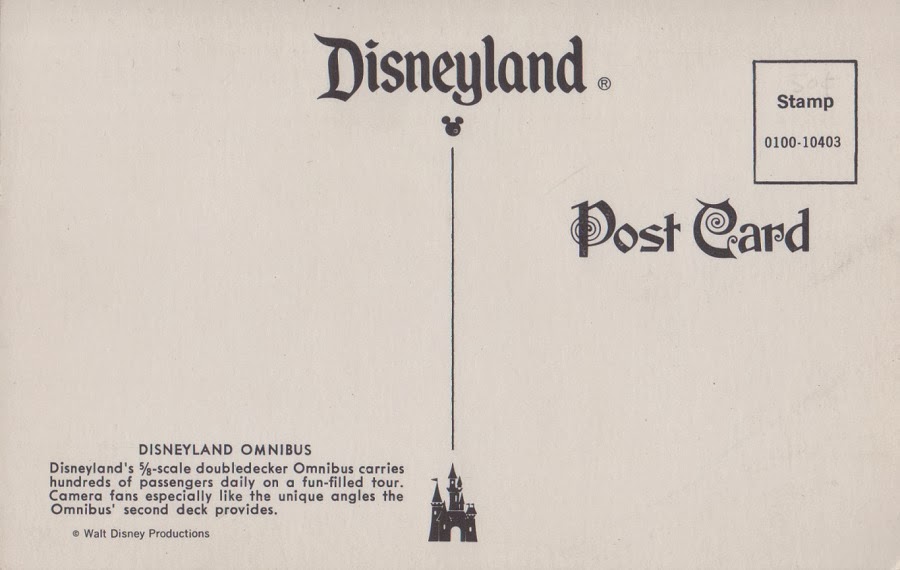 Over on the TouringPlans blog I frequently call the Omnibus “The Greatest Disney Attraction Of All Time” and I’m not joking. A ride up or down Main Street on the Omnibus is pretty much the greatest thing in the world. Obviously, the Omnibuses of today are beautiful but they were even better back in the day. Check out the attraction posters advertising other Disneyland attractions. Also, like the rest of the Main Street vehicles, the Omnibus used to run later in the evening. These days they usually stop in the early afternoon as crowds start to pick up but I dream of one day being able to ride the Omnibus at night. I really enjoy the description on the back of this card: “Camera fans especially like the unique angles the Omnibus’ second deck provides.” So true.
I hope you enjoyed these five Disney postcards. I’ll pick up another batch of cards next time I’m in the area and we’ll do this again.