Skip to content
After WESTCOT Center and Port Disney were canceled (which other better websites have thoroughly documented) Disney unveiled Disney’s California Adventure as the second gate to Disneyland. The following illustration was printed in the Long Beach Press Telegram in 1996. It shows one of the earliest pieces of concept art of the new park released to the public. Being so early in the park’s development there are a ton of differences from what ended up being built in 2001.

©Disney
Unfortunately the quality of this image isn’t that great, being a scan of a 17 year old newspaper. But you can click to enlarge. Since the artwork is conveniently numbered I’ll go down the list and talk about each one. 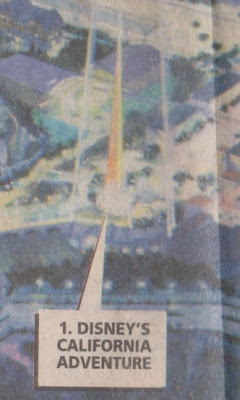 1. Disney’s California Adventure
This is pointing to the plaza of the park. It’s interesting that there is a spire present on this concept art. A spire was part of the park icon in almost all of the WESTCOT art (seen here). The golden spire was ment to symbolize “California sunshine.” Ok… Not present is the C A L I F O R N I A letters at the entrance of the park, actually the entire post card look is missing from the front of the park (seen here). It’s hard to tell exactly what the entrance gate does look like but I assume that this is still the period of time where it was modeled after an amalgamation of California’s famous missions. At some point I had concept art of that but I can’t find it at the moment. 2. Hollywood
I notice three major things about the Hollywood area of the park. First is it looks like the Hyperion Theater (or whatever they called it at the time) is right next to the park entrance. It is known that originally Disney planned to use this theater for a theme park show as well as a concert venue that could be entered from outside the park and without park admission. Next, take a look at the structure on the right that looks like the the famous Theme Building from the Los Angeles International Airport. The rumor is that this housed the planned version of the Superstar Limo roller coaster. Think Rockin’ Roller Coaster from Disney’s Hollywood Studios. Finally, in the middle of the picture notice the sorcerer’s hat from Fantasia. This marked the location of the Animation Building, which did end up on the DCA’s opening day roster. 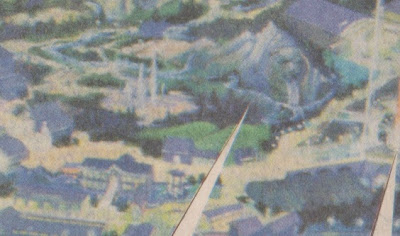 3. Golden California
Grizzly River Run and its bear shaped mountain was on the DCA opening day roster but if you look here you can see an earlier version of bear icon. A giant grizzly head with a water fall coming out of its mouth! That would have been so cool! Also at this point in time Grizzly River Run was not a raft ride but a log flume. The bottom of the image shows what looks like a warehouse district. This could possibly be the San Francisco area of the park, or an early version of the Pacific Wharf that we see in the park today. The two large buildings in the top right corner are what I assume to be Soarin’ Over California. 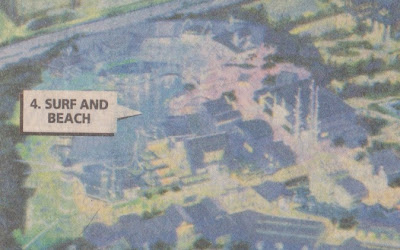 4. Surf and Beach
This area obviously became Paradise Pier but it is extremely different from the one that ended up in the park.  The surf and beach theme represented California’s beach communities. The gigantic building on the right is probably home to Golden Dreams when it was more than just the simple movie that opened with the park. Originally this was planned to be an audio/visual/animatronic extravaganza in the same vein as American Adventure from Epcot. Besides the lighthouse located next to the lagoon it’s hard to tell what else was planned for this area.
5. The Disney Resort Plaza
This is basically what we got. A transportation plaza. Next!