It’s almost unbelievable but Kodak has ended its sponsorship of various Disney attractions, lands, picture spots, and most importantly guide maps. The partnership dates back to when Disneyland opened in 1955. Lets take a look back at the various Kodak ads that have appeared in Disney guide maps over the years. 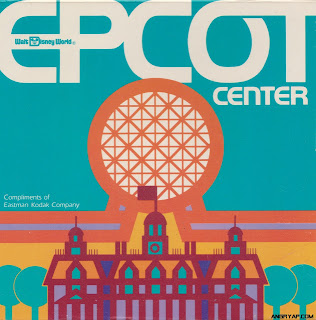 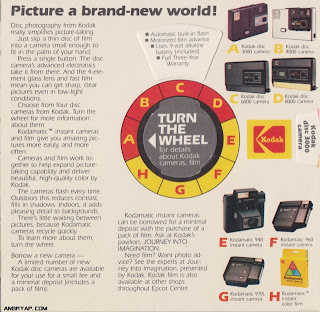 First up is this EPCOT Center map from 1982. This is probably the most elaborate guide map ever produced. In side the map there is a wheel that can be turned to reveal more information on the particular EPCOT pavilion you are interested in. On the back of the map the same wheel shows different information about various Kodak products. This must have cost Kodak a bundle to give out for free! But that’s fine, Kodak’s stock price in 1982 was $86 a share.

This map from late 1986 Disneyland map prominently features the Kodak logo on the front of the cover. The rear cover features a dual advertisement for Captain EO (a Kodak-sponsored attraction), and the their new Kodacolor VR-G 100 and 200 films. Both of which were introduced in 1986. The Kodak stock price at the end of 1986 was $69 a share.

EPCOT Center’s 1992 guide map took a minimalist approach in the Kodak ad. They are used the “Show Your True Colors” slogan which they used for a number of years. Also referenced at the bottom of the ad is the Camera Center which is still located in the park under Spaceship Earth. Kodak shares ended 1992 at $40.50. Notice a trend?

Even Euro Disneyland got in on the Kodak action with this ad also from 1992. The ad features one of Kodak’s disposable cameras. I think I would die if I ever got a picture as good as the one in this ad. A kid following Donald Duck while 3 baby ducks follow her. Incredible.

Kodak spent the late 90s advertising their new Advantix film. It can be found on the backs of various guide maps published in during this time, the example shown here is the Epcot 1997 from December. This was also the time when sections of pages in the guide maps were dedicated to photography tips provided by the company (seen here). Speaking of the late 90s, the Eastman Kodak company actually saw their stock prices raise during this time before again tumbling in the 2000s. The stock prices at the end of the decade were $60.56 (1997), $72 (1998), and $66.25 (1999).

This ad is also from 1997 but I wanted to mention it because it was used for a number of years in the Disneyland guides. 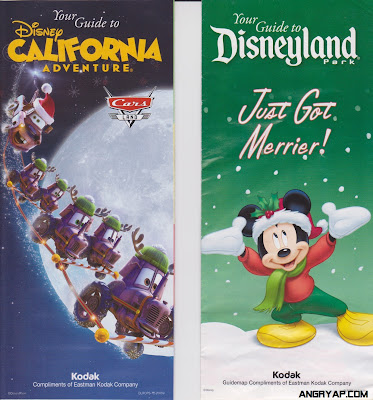 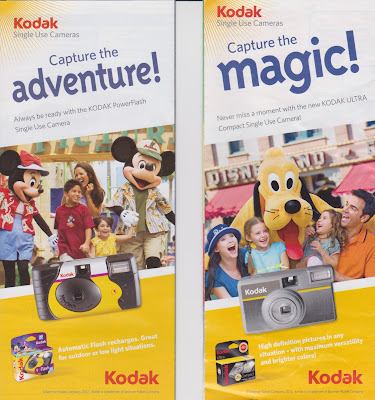 As the 2000s came and went the Kodak company was losing money almost every year. In early 2012 the company announced they were filing for bankruptcy. One of the world’s most valuable and recognizable brands have been reduced to nothing. Seen here is the last Disneyland and DCA guide maps sponsored by Kodak. These were available during the 2012 holiday season. 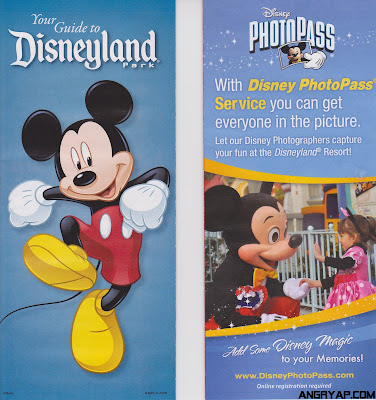 Seen here is the first Disneyland guide map not sponsored by Kodak. The current maps are unsponsored and feature a Disney Photopass ad on the back.
Kodak’s sponsorship has now faded to Yesterland. The company no longer sponsors any attractions (such as Bug’s Land, Captain EO, Honey I Shrunk the Audience, It’s Tough to be a Bug, Muppet Vision 3D, as well as many others). Its Kodak Photo Spots will soon disappear from Disneyland and Walt Disney World. Kodak may not have always been the guide map sponsor (another company that failed to adapt to the modern age, Polaroid, sponsored the maps in the 70s) but they are definitely the one the will be remembered. Here’s to you Kodak!