Skip to content
Epcot in 1997 was going through a transition from classic EPCOT Center to just plain old Epcot. Thankfully, most of the classic attractions were hanging around at this point.

This was the Christmas season so the cover shows the various holiday offerings such as Candlelight Processional and Lights of Winter. Notice the Walt Disney World 25th anniversary logo in the bottom right. When this map was printed the 25th celebration was just about to wrap up its 15 month long promotion (known for the infamous cake castle at the Magic Kingdom). 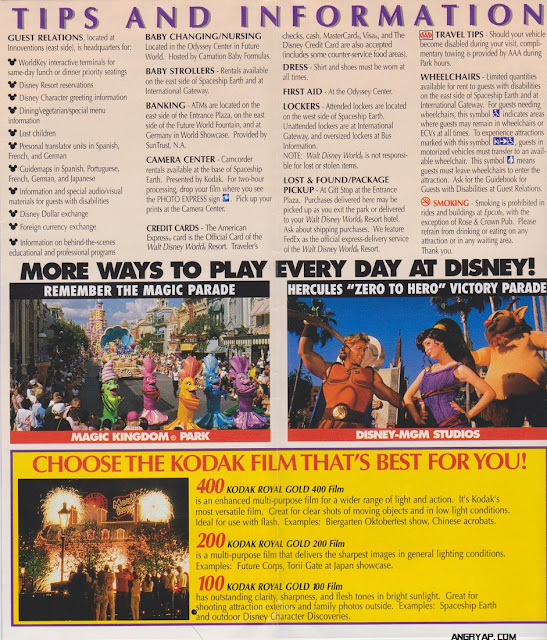 This page shows the typical park information. Notice the advertisements for the two parades. The Hercules Victory Parade lasted for less than a year before being replaced by a parade to promote the new Mulan movie in 1998. The “Remember the Magic” parade is also mentioned even though I could have sworn at this point it was renamed “Disney’s Magical Moments Parade” (Magical Moments lasted from 1997 to 2001). Also notice the old Moulin Rouge portion of Illuminations at the bottom of the page.

The only thing I want to point out on this page is the Lights of Winter. Much rage was brought to Epcot fans when this Christmas feature was retired in 2009. Disney’s official explanation was “Note:The Lights of Winter at Epcot has been enjoyed for years. But tech to operate the lights is obsolete, prompting us to retire the lights.” Which is hilarious because a similar show on a much larger scale is still offered over at Disney’s Hollywood Studios. 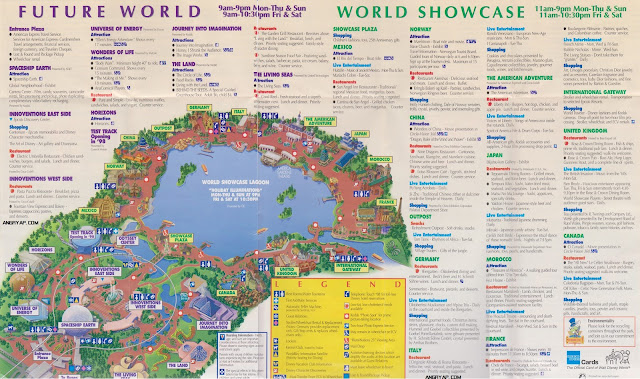 (click to enlarge)
World Showcase hasn’t changed much since 1997 but Future World has gone through many changes. Spaceship Earth:
At this point Spaceship Earth was on its second major revision. Jeremy Irons replaced Walter Cronkite narrator.
Universe of Energy:
The original UoE had closed in 1996 and was replaced by the version that is still running today, Ellen’s Energy Adventure.
Wonders of Life:
I’ve talked a lot about WoL in previous posts. Basically it used to be filled with fun attractions, including one of the most popular rides in the park (Body Wars). Now, it is closed for most of the year, When it is opened there are no attractions and it is used for either wine tasting or gardening seminars…
Horizons:
I know, you’re sick that every time I post about Horizons I say its the best attraction in Disney history. It was replaced by Mission Space in 1999.
Test Track:
World of Motion closed January 1996. Test Track was originally scheduled to open in September 1997 but was delayed several times. Even though the map says “Opening in ’98” the attraction still did not officially open until March 1999.
Journey Into Imagination:
The original JII was still open at this point. Its replacement, “Journey Into Your Imagination,” lasted 2 years before it was replaced by the current version.
The Land:
The Land hasn’t gone though many changes since 1997, the major one being the arrival of Soarin’. Food Rocks closed to make way for Soarin’ but “Circle of Life” and “Living with the Land” are still around.
The Living Seas:
The original Seacabs attraction was open until 2001 but a replacement (The Seas with Nemo and Friends) wouldn’t come until 2005.

I’ve seen a lot of Kodak map advertisements during my adventures in collection Disney maps but this one is probably my favorite. Not only does it have Spaceship Earth in the background but it also shows Dreamfinder and Figment!