Skip to content
In 1997 Disneyland retired the popular Main Street Electrical Parade. Its replacement was called Light Magic, a strange half parade, half stage show (or “streetacular” as Disney called it). I won’t go in to too much of the specifics about the parade, mostly because several other people have done that, like Jim Hill’s EIGHT PART(!) series. On May 13, 1997 a annual passholder preview party was held, this was a separate “hard ticket” event that, if I remember correctly, cost $35 per a person. If you notice in the post title I called this event “infamous.” The reason being is that it will go down in history as probably the biggest passholder revolt ever on Disney property. To make a long story short, the Light Magic presentation that night was filled with technical issues (not to mention it was an absolutely terrible parade). The annual passholder party was pretty much a disaster and keep in mind it had been billed as the world preimere. Then something hilarious happened, after all the issues with that night’s performance Disney announced to thousands of their most hardcore and brutally critical fans in attendance that this party was not for the world premiere. Disney changed their mind and it was announced that the annual passholder party was for a dress rehearsal. After this the thousands in attendance reacted calmly, and left the park in an orderly fashion. HAHA, i’m just kidding. The APs at the party freaked out, screamed out loud and got in line at guest services at City Hall to complain. After a short amount of time the line of angry APs WENT ALL THE WAY UP MAIN STREET TO THE HUB!!! What a night! For some reason after all that fun Disney had suddenly been soured on throwing parties for annual passholders. It would be another 14 YEARS before they would hold another one. On to the pamphlet!

The front of the guide is pretty simple. Sleeping Beauty castle with some spotlights in the back. No mention of Light Magic is a little weird. 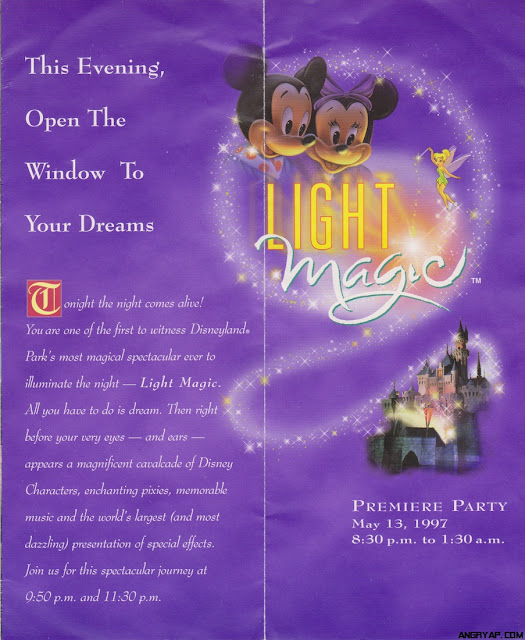 The second page shows the Light Magic logo and a quick run down of the event. I do love that the party went until 1:30 AM. 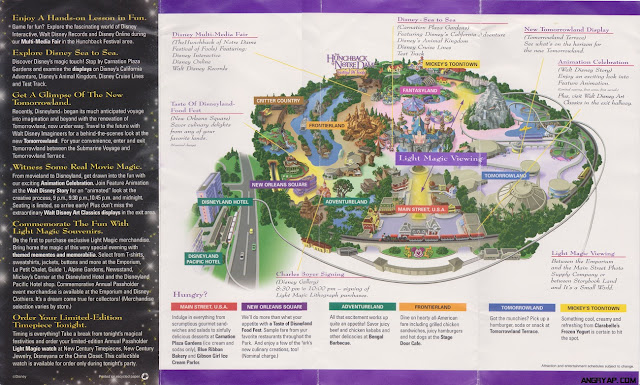 (click to enlarge)
Besides Light Magic, the park was open with its full roster of attractions and some small extras you can see on the map. Also notice at this point New Tomorrowland construction (which opened the next year in 1998) was in full swing. The only attractions in Tomorrowland at the time were Star Tours, Space Mountain, Autopia, and the Submarine Voyage. The front entrance of Tomorrowland was almost completely blocked by construction walls. Notice the “Light Magic Viewing” areas listed on the map. This was not a typical parade that could be watched at any point of the parade route. The parade floats would stop at two points and then the show would start. The one effect I thought was cool for LM was the facades on Main Street were covered with thousands of strands of fiber optic light. During some show scenes the Main Street buildings would light up and/or appear to glow with pixie dust. This effect was never used again for any other parade and most of the infrastructure was removed during various refurbishments over the years.

The back of the guide book. Boring! In the next few months it became clear that Light Magic was a total failure. The passholder revolt and bad word of mouth from the general public doomed the show. Heres where it gets weird, the show was canceled on September 8, 1997 ($20,000,000 spent on a parade that lasted 5 months! Ouch!) but then for some strange reason Disney announced it would be on hiatus until 2000. Why 2000? Why put a parade on hiatus for three years to rework it? It all seemed very strange. 2000 came and went with no mention of Light Magic from the Disney company but its memory lives on as one of the park’s biggest failures ever.