Skip to content
First, thanks to the excellent Disney Tourist Blog for linking Angry AP in their blog post from the past weekend.Second, sorry for no update last week. Overtime at work again prevented me from preparing an update.
Today’s update is a follow up to this post I made back in September 2011. It was about a promotion Disneyland held in March 1994 called “Go Pog Wild and Rollerblade Crazy!” From the previous update:

“For those of you who don’t know what POGs are (or are acting to cool to remember) here is the link to the Wikipedia article describing the game. Naturally Disneyland (and even Knott’s Berry Farm) wanted to capitalize on the fad so they offered an exclusive Disneyland POG set  (4 pogs and a slammer) to kids under 13. I have them around here somewhere but I can’t find them (and for that reason I have failed you). A big part of the promotion was the all day POG tournament which was held in the area near the Motor Boat Cruise.”
The fact that I didn’t have the Disneyland Pog set to show you guys has drove me crazy. Luckily I finally got a chance to make things right. This weekend I attended a Disneyana Fan Club show. I was searching through boxes of hundreds of items of random Disney ephemera from the past 50 years, then I saw it. The Disneyland Pog Wild set! 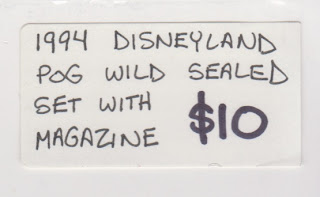 For $10 I was able to obtain it. As I mentioned in my previous post about Pog Wild, I did attend the event and at some point did own the Pog Wild set. But, like a lot of Disneyland items from childhood, the Pog set has gone missing from my collections. I’m not going to lie, if this set was any more than $10 I probably would not have purchased it. But the Pog gods smiled upon me that day. 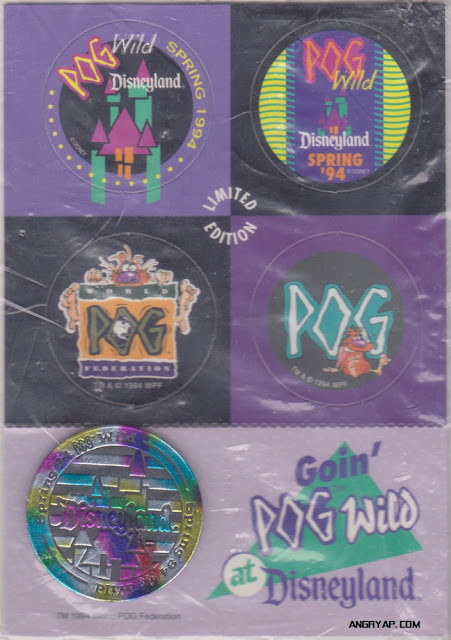 Here it is. 4 Pogs and one slammer. The designs on the first two Pogs reek of the early 90s (which is what makes them so awesome), the second two are a but weak. It looks like they can be found in any standard Pog set. I’d like to point out that yes, I COULD have scanned this at better quality if I removed the Pogs from their sealed bag. I like you guys, but I don’t like you so much as to disturb my set of Disneyland Pogs.
As if having this Pog set in my collection wasn’t cool enough, the package also included a magazine! 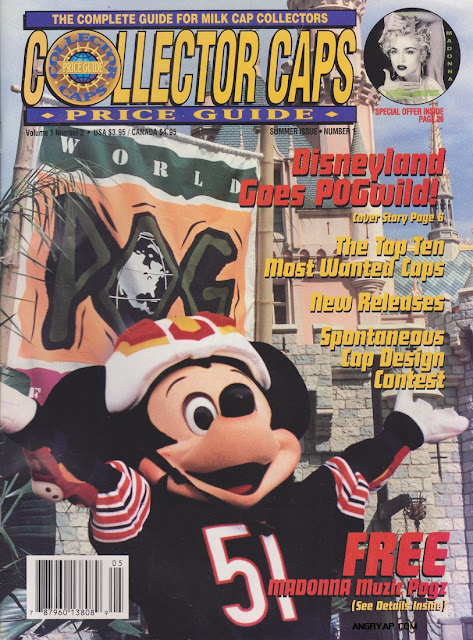 Yes, at one point Pogs were popular enough to have several magazines dedicated to them. This one in particular is called Collector Caps Price Guide. The front features Mickey Mouse in a football jersey and helmet (what?). 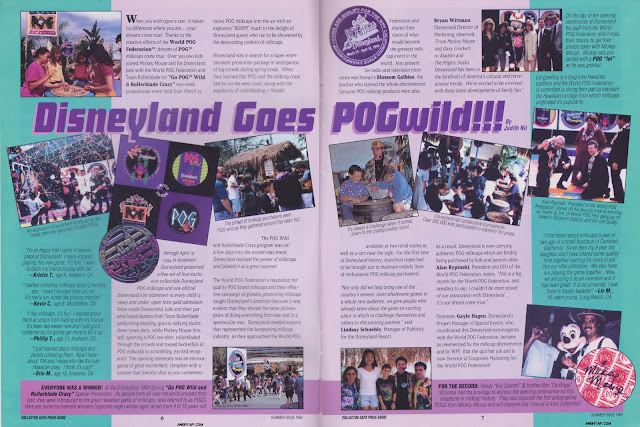 (click to enlarge)
Be sure to enlarge the scan of this magazine to see some truly rare pictures of this event at Disneyland (look for yourself, there are hardly any pictures of this online). As you can see in the pictures the Pog area was near the Motor Boat Lagoon. Also, as I speculated in my previous post, the Rollerblade ramp was located in front of the Mission to Mars attraction. If Disney did something like put a Rollerblade ramp in front of an attraction these days I think Disney fans would be filled with so much rage they would literally suffer from spontaneous combustion.