I hope everyone enjoyed my latest Walt Disney World trip report. It’s fun to sit down and relive a WDW vacation, maybe I’ll start doing some Disneyland trip reports every now and then. For now I will be getting back in to the bread and butter of this blog, Disneyland and Walt Disney World nostalgia. For this post I thought I’d put up a few things haven’t fit it to any other post so far. 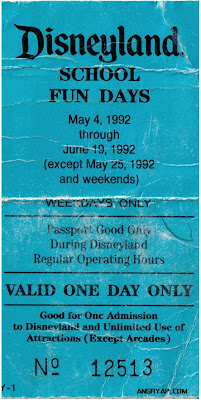 First up is this Disneyland School Fun Days ticket from 1992. I tried to research any information on what School Fun Days were but it doesn’t look like there is any thing out there. As far as the ticket goes it’s pretty bland looking compared to most other Disneyland tickets, but it does the job. 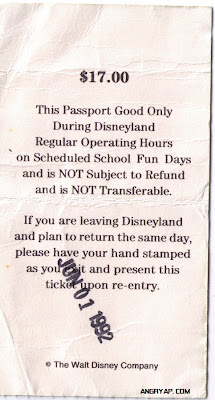 The back shows the price of the ticket being $17 which was a good discount at the time. The standard 1 day ticket in 1992 was $27.50. Very big thanks to my friend Dave for sending this in. The same Dave who sent in pics of his amazing Haunted Mansion shadow boxes. 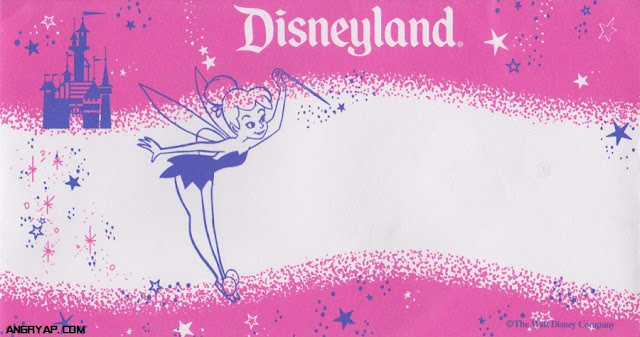 Next up is this envelope that Disneyland has been using for decades. I don’t know exactly when they started using it but it has been for as long as I can remember. When I was younger my grandma used to buy Disney Dollars and they would give it to her in the same envelope (this was in the late ’80s). The envelope pictured was given to me in 2010 when I renewed my annual pass. I’ve always loved how beautifully simple and old school it is. And notice it doesn’t use the generic “Disneyland Park” or “Disneyland Resort” logos. Just “Disneyland” like it should be. 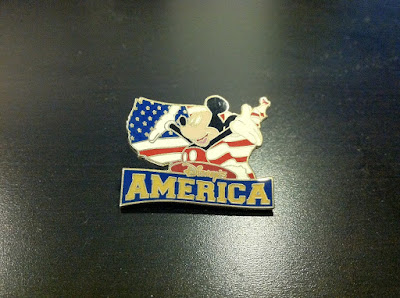 The last item in the grab bag is the only piece of Disney’s America merchandise that I own. For those of you that don’t know about Disney’s America, it was a purposed American history-themed park that Disney was planning on opening in Virgina. It was canceled because people absurdly thought Disney was going to desecrate sacred battlegrounds. It’s laughable that people were so up in arms about this considering that the same area that Disney wanted to buy is now populated with strip malls and motels. Way to go Virginia! You can read more about Disney’s America on Wikipedia and Jim Hill’s website. By the way, don’t feel to bad that Disney’s America didn’t get built, most of the ideas were reused for the original Disney’s California Adventure. Anyway, back to the pin. I am not a Disney pin collector but I do have a few. I thought this was interesting and cheap enough for me to buy.