Skip to content
I’ve been wanting to do post about this game ever since I started this blog and now I finally did! This is one of the most beloved of games of my childhood (like I’m sure it is for many other Disneyland/World obsessed kids!). It’s Disney Adventures in the Magic Kingdom for the Nintendo Entertainment System! 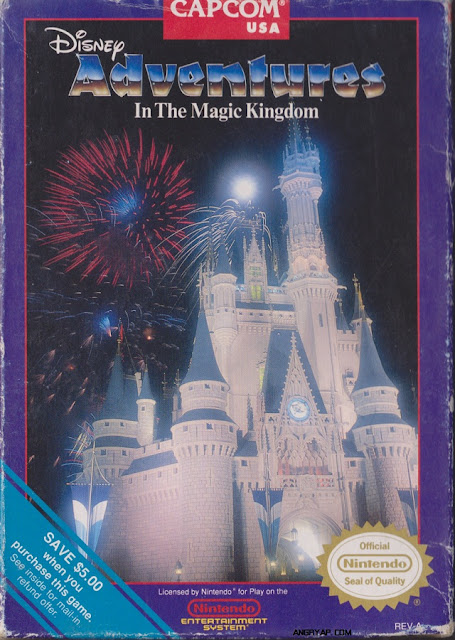 The front of the box is shown above. First things first the game is called Adventures in the Magic Kingdom, and shows Cinderella castle on the cover. This is where it’s relation to Walt Disney World’s Magic Kingdom ends. The actual in-game map is based off of Disneyland, minus the Matterhorn. 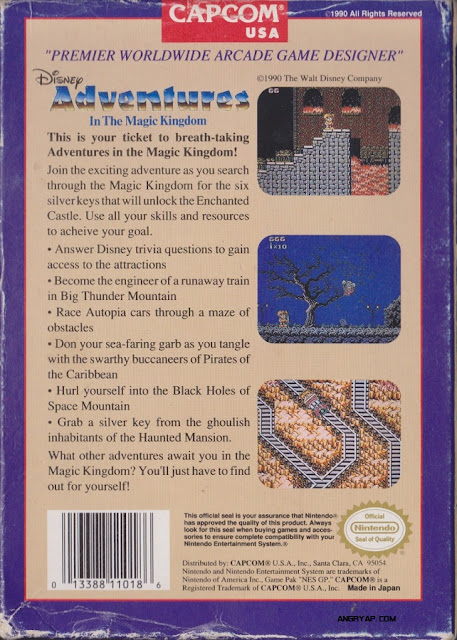 The back of the game box goes over the premise of the game and lists the different attractions that are playable in game. You really have no idea how big of a deal this game was when I was a kid. It was released in 1990, I was 7 years old at the time and a full blown Disneyland addict. I first experienced this game Disneyland’s Videopolis when Capcom (the game’s publisher) had it on display with their other Disney licensed games, such as Duck Tails, Rescue Rangers, and Darkwing Duck. Those other games are classics but I fell in love instantly Adventures because it was a chance to relive these amazing rides in the comfort of my own home! Of coarse this is ridiculous because the levels in the game are very loosely based on the attractions they are named after. I didn’t care. I was a unapologetically fully brain washed Disney kid. 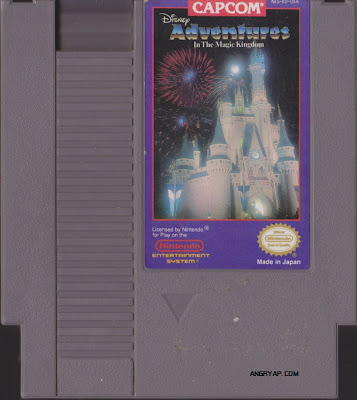 The actual game cart. Yes, this is the same one I owned as a kid. Let’s pop this bad boy in! 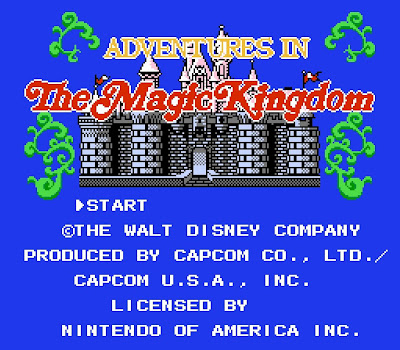 The title screen shows Disneyland’s Sleeping Beauty castle and title art. Being an insane fanboy with OCD, it has always drove me crazy that the art for the Adventures in the Magic Kingdom text does not match the one on the cover. But whatever, I’ve learned to live it. 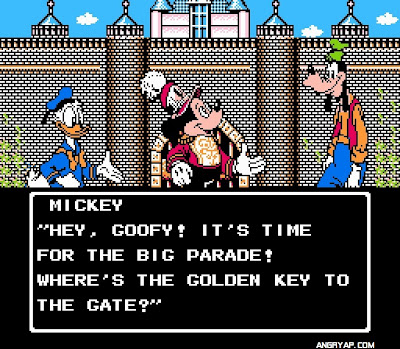 After naming your character (a child with a cowboy hat…) you are shown a screen with dialog between Mickey, Donald, and Goofy. This one screen sets up the entire story for the game. It’s parade time but Mickey can’t find the key to the “Enchanted Castle” (I know…). This means that you must reach the end of each attraction and obtain keys for Mickey. 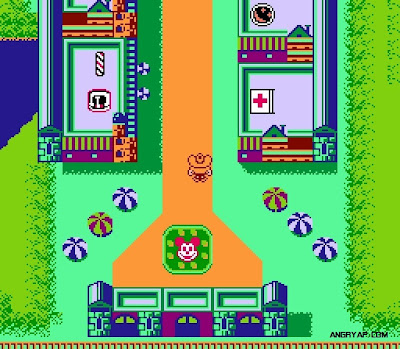 You start out in town square of Main Street USA. Just like in real life you must make your way down Main Street and walk through the hub to access the different lands. 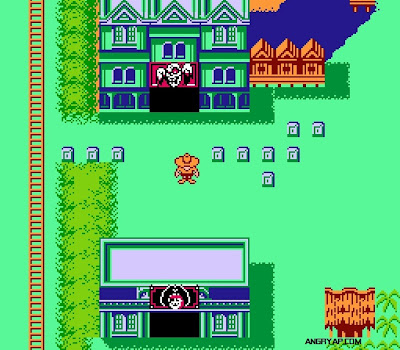 Lets start off with the Adventureland/Frontierland/New Orleans Square area. Obviously the in game map is not very detailed. But the general location of the attractions is the same. Unfortunately the iconic building exteriors for Pirates of the Caribbean and Haunted Mansion are not recreated in the game. 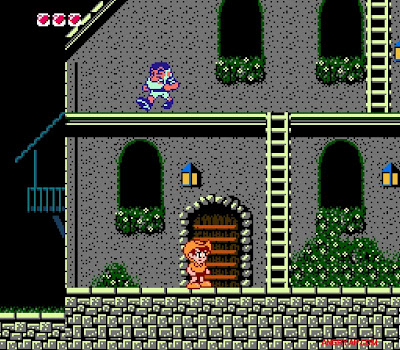 The Pirates of the Caribbean level. 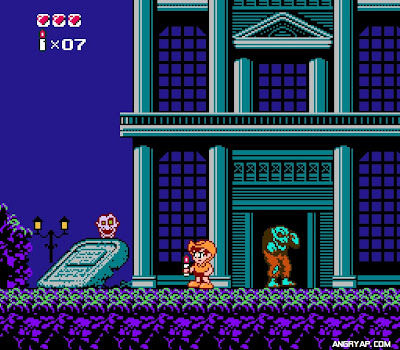 The Haunted Mansion level. As you can see by the above screen shots the HM and POTC levels are very similar. Both levels are side scrolling (like Super Mario Bros, but crappy) that require you to reach the end of the level. In the HM level the enemies are zombies and ghost, in POTC the enemies are Pirates (duh). To defeat them you must hit them with you candle. You only have a limited number of candles and there aren’t very many extras found in the level. I should also mention that this game features zero songs from the Disney theme parks or even movies for that matter. All songs are original compositions for the game. 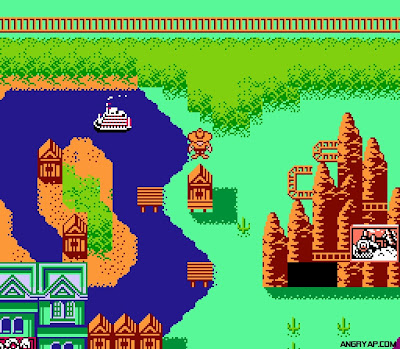 Moving up past the Haunted Mansion you can see the Rivers of America and Big Thunder Mountain. 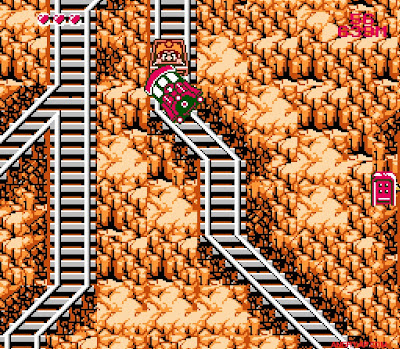 The Big Thunder Mountain level is not only hard but it is also cheap (a lethal combination in the NES days of gaming). Your goal in this level is to reach one of four stations at the end of the level that has the “goal” sign on it. The problem is that everyone is trying to stop you from reaching this goal. Your train is constantly moving, there are no breaks! Also, as you are screaming down the tracks there are boulders, rails, and dead ends that constantly pop up and kill you. I forgot to mention this before but in each level you are only allowed to be hit three times before you die have to start over. This game is not easy! 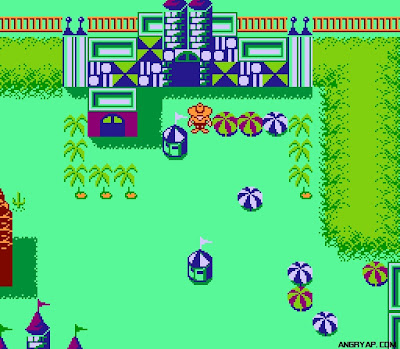 Over in Fantasyland the only building to make it in is It’s a Small World. Unfortunately this attraction is not playable. I would have love to seen tiny ethnic dolls attacking you as you try to make it to the end of the level but for whatever reason they did not include this in the game. Bummer. 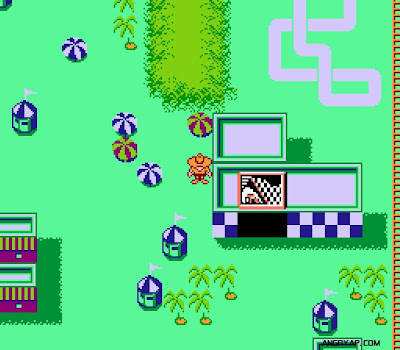 Down a little further from Fantasyland you’ll find the Autopia level. This level is bland compared to the other levels but it’s the same basic idea. This time you are in a Autopia car and your goal is to drive to the end of the level. 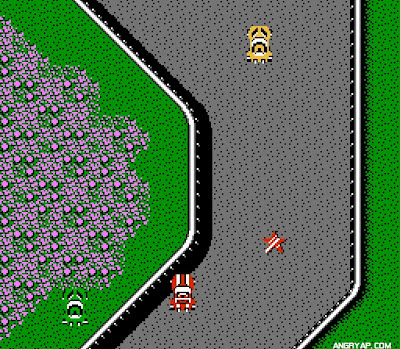 This level is also the easiest of the six. The only real hazard is falling in to the water, that will kill you instantly. 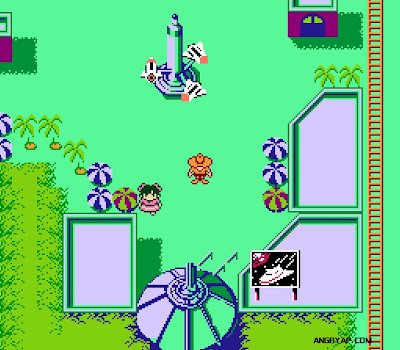 The last of the six levels (last for the sake of this review, you are able to play the levels in any order you please) is Space Mountain. 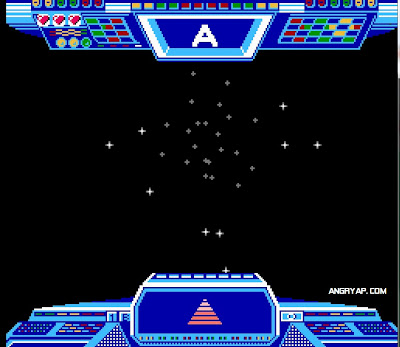 This level plays similar to the “quick time events” found in most games of today. As you are flying through space one of the directional arrows will appear in the console at the bottom of the screen and the player must quickly press that arrow in order to advance. A enemy space ship or asteroid will also appear where the player must press the A or B buttons. After three misses the level is over and you must re-start. 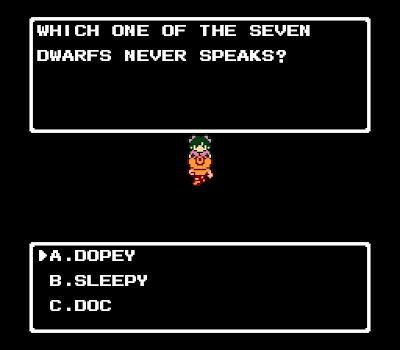 The final key must be obtained through a series of trivia questions. If you are even moderate Disney fan you should have no problem getting through them. After obtaining all the keys Mickey is then able to open the “Enchanted Castle” (ugh…) and start the parade.
That’s all for this review. I hate to say it, but the game has not aged very well. But it’s still a classic! It’s worth having in your Disney collection for the box art alone!