Skip to content
Let’s get in to our time machines and travel back to the magical year of 1996. Bill Clinton was president of the United States. The number one movie of the year was Independence Day, and the most popular song in the world was Wannabe by Spice Girls. Meanwhile at Disneyland, the Indiana Jones Adventure celebrated it’s first birthday while the park was busy promoting the Disney’s newest animated movie, The Hunchback of Notre Dame.

Unfortunately 1996 also marked the end of the Main Street Electrical Parade’s run at Disneyland (it would return 5 years later to Disney’s California Adventure and run till 2010 when it was sent to Magic Kingdom). It’s also interesting to note that three temporary, but very popular, movie promotions were all still running in the park years after they were supposed to end. I’m talking about The Spirit of Pocahontas stage show, and the epic Lion King Celebration Parade (at this point the Lion King parade had been running for 2 years!). 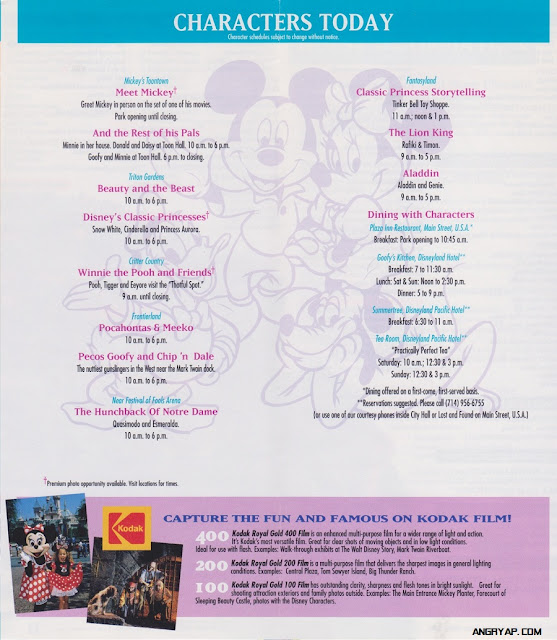 The characters are all available in their usual spots. I would like to point out that the spot where guests could meet with Pecos Goofy and Chip ‘n Dale is now a ODV cart that sells turkey legs. That’s progress dear!

I don’t really know why I even include pages like this in my posts. I’m sure if I didn’t someone would complain about the maps not being complete and how it ruined their day. So here it is. I wouldn’t follow this information today because I doubt you could still go to any of the places listed to cash your checks.

(click to enlarge)
This is the map of Disneyland 1996. I’ve gone over the changes the park has gone through many times in previous map posts and I would do it again but I’m preparing this on a night before a work shift that starts at 4 AM… One thing I do want to point out is the ad on the far left that shows Disneyland’s offerings for Thanksgiving. While I was growing up I knew Disneyland did Thanksgiving dinners but I don’t think very many people went. These days they are extremely popular in both Disneyland and World. I love how Meeko is absolutely fiending for that turkey.

I love the vacation Mickey lounging on the box of that camera. I was one of those stupid kids that was influenced by what cartoon characters were on the boxes of products so I no doubt would have bought that.