Skip to content
You may be asking yourself, “What the heck is a cassette tape” Well I will tell you what a cassette tape is! A cassette tape is something your grandma buys you because she is too cheap to spend the extra couple of dollars to get the CD. Anyway…
This is one of those no brainer merchendise items. Am album that features the now classic Fantasmic soundtrack (AND ending music!) PLUS the Main Street Electrical Parade soundtrack! Yes, at one point Disney actually did sell merchendise for one of their most popular attractions of all time! I know, it’s hard to believe!
The front of the cassette liner features the beautiful Fantasmic art. I remember going to Disneyland while they were building Fanstasmic and seeing this art on the work walls covering the Rivers of America. At that point (1992) there was no Disney internet community so I had no idea what Fantasmic was going to be!

The back features track names and credits for every single musical piece in the show! You can also see the official names for all the sections of the Main Street Electrical Parade! 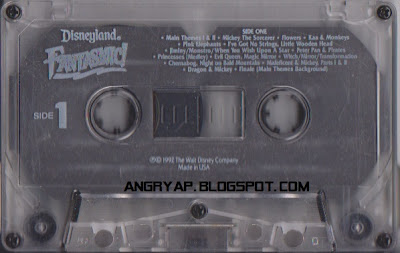 For those of you unaware, this is what a cassette tape looked like.
Be sure to join me on Monday when I show some unique merchandise from Tokyo Disneyland!