Today’s planned update for crazy merchandise from Tokyo Disneyland got lost somewhere! I promise I will come back to that at some point but for now take a look at this map from an extremely unique point in Disneyland history! I have A LOT to say about this map so lets get started…

That’s right! This is the era of Light Magic. What more can I say about this gigantic failure that a million other Disney fan websites haven’t said already? For those that don’t remember, Jim Hill has a extensive collection of post detailing the development and aftermath of one of Disneyland’s biggest failures of all time, including it’s impact on the future of annual passes!
Also featured on this cover are several temporary shows based on the animated movies of the time. This was back when Disney had a high budget parade or stage show for every animated movie it released. Notice at this point shows/parades based on Hunchback of Notre Dame, Pocahontas, AND Hercules were all running at the same time!
Also on this schedule is what some (including myself) consider the greatest Tomorrowland band of all time. Voyager! 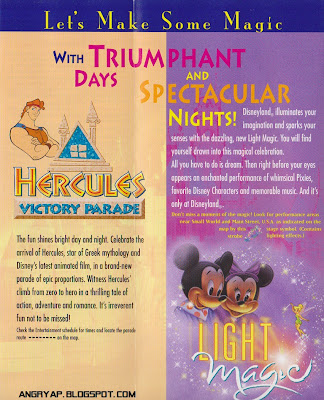 I’m not going to lie, I never did see the Hercules Victory Parade. At this point I started actively avoiding parades. Nothing wrong with them, just not my cup of tea. I did however see Light Magic at the Annual Passholder preview party. What a nightmare that was! At one point, the parade broke down on Main Street for over 20 minutes! I’ve never heard Disneyland fans collectively boo something until that night. 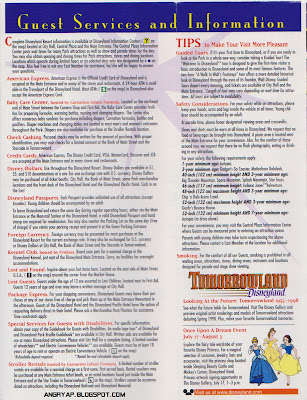 WOW! Apparently Disney had never heard of Wall of Text. 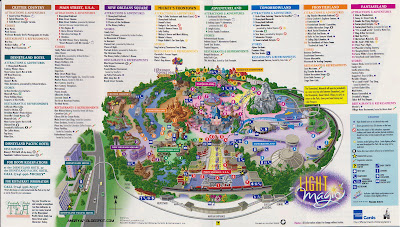 (click to enlarge)
Here’s where it gets good. At this point in time, New Tomorrowland construction was in full swing. Much of the land was closed off to guests. Notice the Astro Jets are missing! They were closed and removed at this point. Above Tomorrowland on the map there is a giant blue arrow informing guests of the path they can take to reach reach Space Mountain and Starcade. Captain EO (my all time favorite Disney attraction) had been closed for 3 months at the time of this map. I was heartbroken when it closed. Especially considering it was replaced by the TERRIBLE Honey I shrunk the Audience. Surprisingly everything else in Tomorrowland is open, including Circle-Vision.

The classic Kodak advertisement that appeared on the back of guide maps for many years.