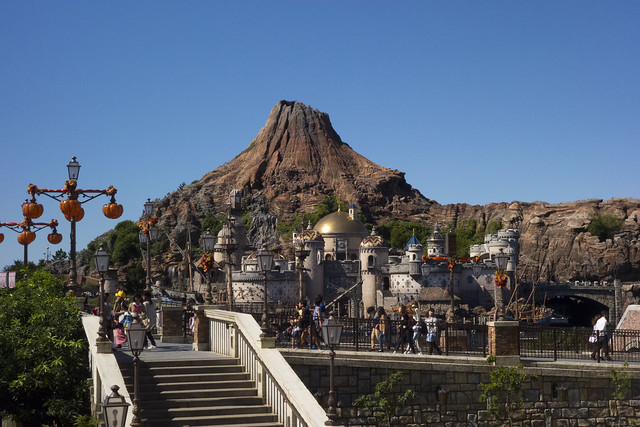 There’s no room for debate, Tokyo DisneySea is the most beautiful Disney theme park on the planet. I mentioned this in my Tokyo Disney Resort Observations post on TouringPlans and I will say it again here: It’s hard not to be hyperbolic when talking about Tokyo DisneySea. It’s amazing, incredible, and jaw dropping, any superlative you can think of applies to DisneySea. As you enter the park you are instantly hit with this fact. You walk through a plaza with a sculpture of the earth known as the Aquasphere. It’s a large model of the earth that represents all of mankind living together on our “water planet.” After entering through a breezeway you get you first glimpse of Mount Prometheus, it’s a fantastic entrance experience.

Before I get to my first full day in the park I’ll talk about our a short trip we made the night before. You see, as I mentioned in my previous post, Tokyo Disneyland and DisneySea are known for their crowds, Massive amounts of people fill both parks almost every day of the year which can cause long waits for food and rides. So when we found out a typhoon was rolling in on the night we got back from Osaka we knew a trip to DisneySea was something we should consider. During typhoons the trains in Tokyo can have limited service or shut down completely so the locals leave the parks to make sure they can get home. This meant that we had DisneySea to ourselves that night. We purchased ponchos from our hotel gift shop and then made our way to the front gate of DisneySea to buy our Starlight Pass, which is a ticket that can only be purchased after 6 PM at a reduced price.
Sure, we could have sat in out hotel room and stayed dry but at this point in our trip to Japan we had been in town for 4 or 5 days and had done Tokyo Disneyland a few times and visited Osaka to sight see and go to Universal Studios Japan. My anticipation to see DisneySea was killing me so it was great to finally see this park that is so highly revered among fans worldwide. 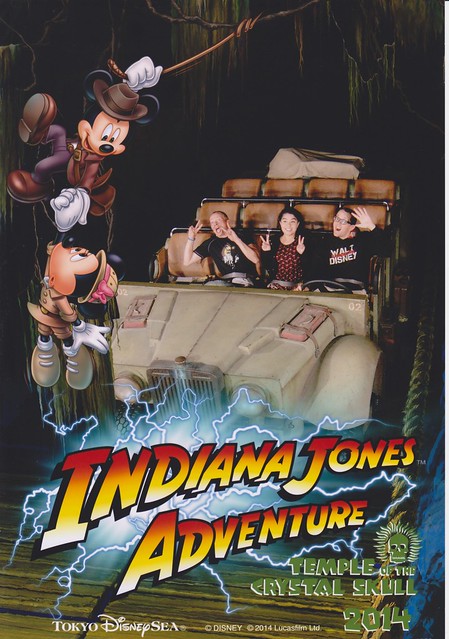 Unfortunately I don’t have many pictures from that first night, I didnt want to bring a camera and risk it getting damaged in the rain. But thanks to the low crowds we got our own car on Indiana Jones Adventure which produced this great on-ride photo. 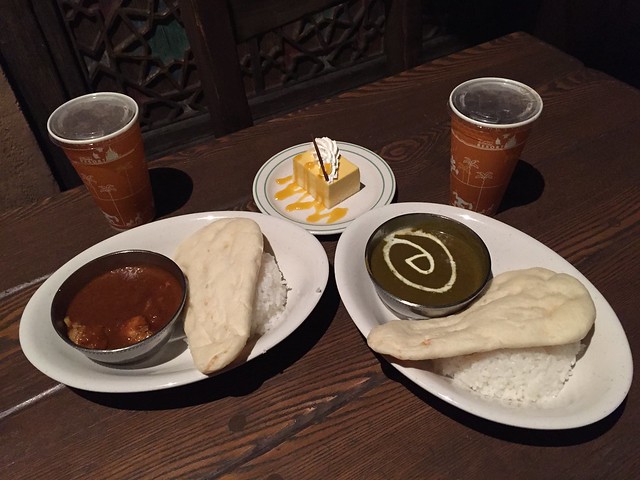 We also at Casbah Food Court at the recommendation of Tom and Sarah. Who knew theme park curry could be this good? 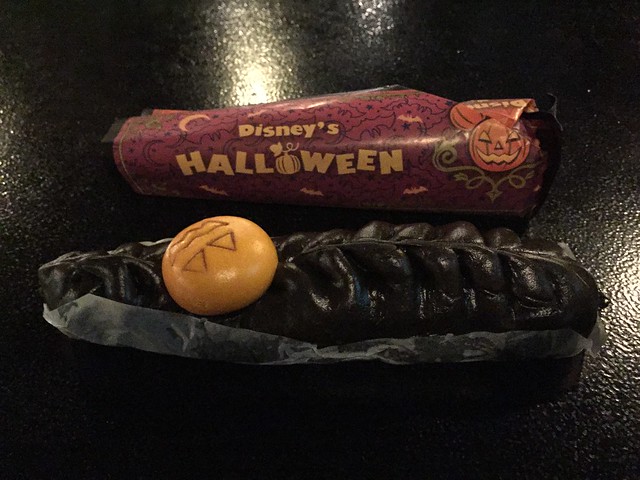 We also tried the Black Goyza Dog which is a famous snack at Tokyo DisneySea. I’ve heard that the line for the gyoza dog can sometimes be an hour long. So ProTip, if you want to try it without waiting in line just go during a typhoon. It was bland but overall not bad.

The line for Indiana Jones Adventure can get very long so we took advantage while we could. See the picture above? That queue would normally be packed with people but we were the only ones. Besides the queue the ride is pretty much the same as its American counterpart. There’s a few changes here and there, like in Disneyland’s version where there’s a projection effect of rats falling off of a branch, in Tokyo there is a stone idol that blows a fireball in your face. I wouldn’t say DisneySea’s is better, I like some parts of Anaheim’s and some parts of Tokyo’s. 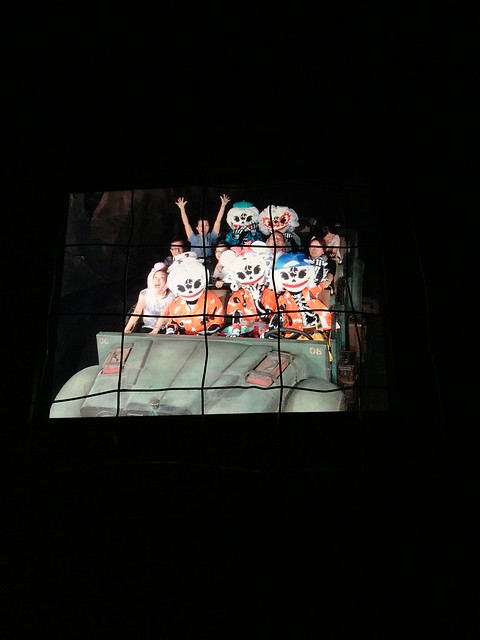 Even the Skeleton Friends get to ride! I talk more about these guys later. 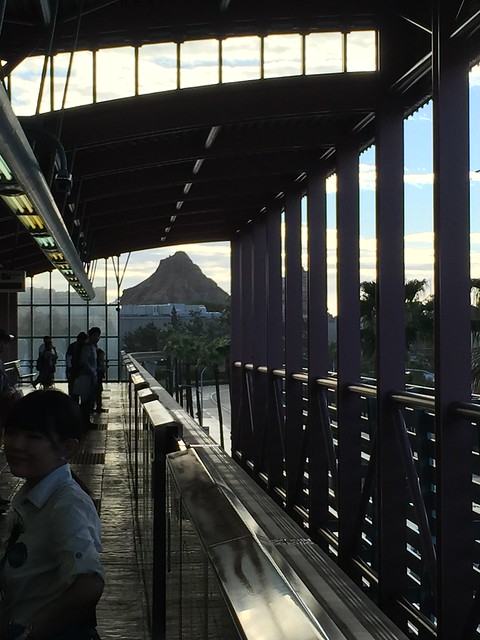 We had a 4 hours in the park the night before and were ready for our first full day at Tokyo DisneySea. We could see Mount Prometheus from the monorail station at our hotel so I again found my anticipation building! 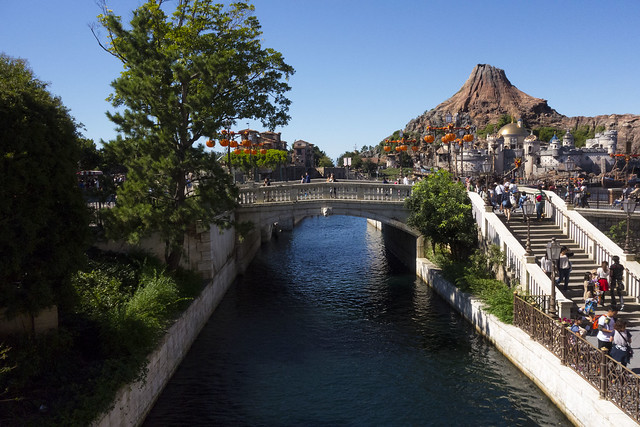 Like I said in my last trip report post, rope drop is no joke. Thousands of people running to their first attraction, just like in Tokyo Disneyland, but in this case they are all running to Toy Story Mania. It’s only a couple of years old at DisneySea so it’s still very popular with guests. Luckily this means it’s easier to get to the other attractions for people like us who have no plans to ride Toy Story Mania. 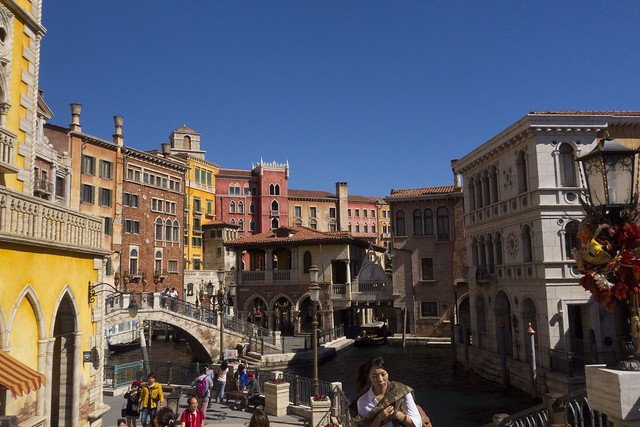 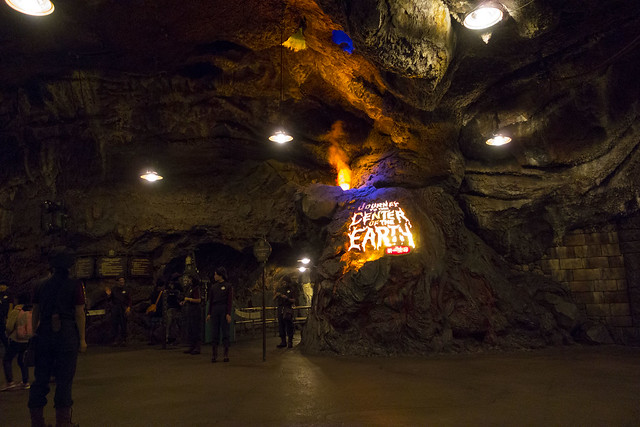 Our rope drop plan was to have a “runner” go and retrieve Tower of Terror FastPasses and then meet everyone else at Journey to the Center of the Earth. This ended up working perfectly, we got an early return time for ToT and had a minimal wait on Journey.
Journey to the Center of the Earth had a good level of mystery to it, sure everyone knows it’s in a giant volcano, and the ride vehicles look like a steampunk version of a Test Track car. But other than that I didn’t really know much about the ride. I knew from pictures that at some point you encounter a giant lava monster but wow seeing it in person was very impressive.

Journey to the Center of the Earth is now one of my favorite Disney rides. The lava monster thing is so cool! #TokyoDisneySea
A video posted by Guy Selga (@guyselga) on Oct 10, 2014 at 4:40pm PDT

I never was able to get a good picture of the lava monster but here’s a video I took with my cellphone. 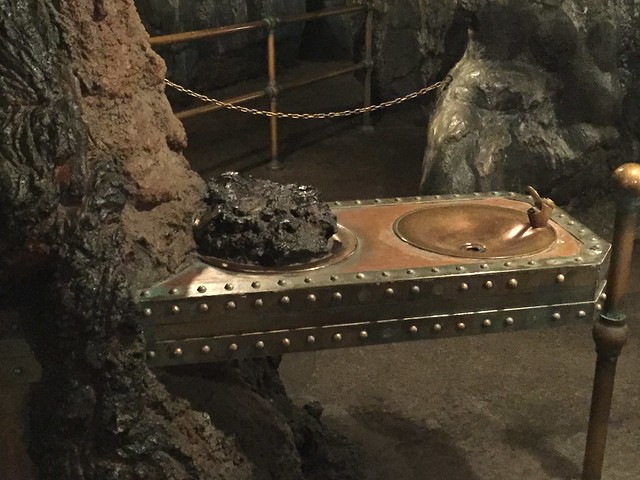 One of my favorite details I saw on my entire trip was this in the Journey to the Center of the Earth queue. It’s a drinking fountain but one of the bowls has some dried lava in it. Zoom in on the picture and you can see there’s even a little water spout in stuck on the side of the lava. So creative! It’s a minor detail but it’s one of the thousands of little things that make DisneySea so great. 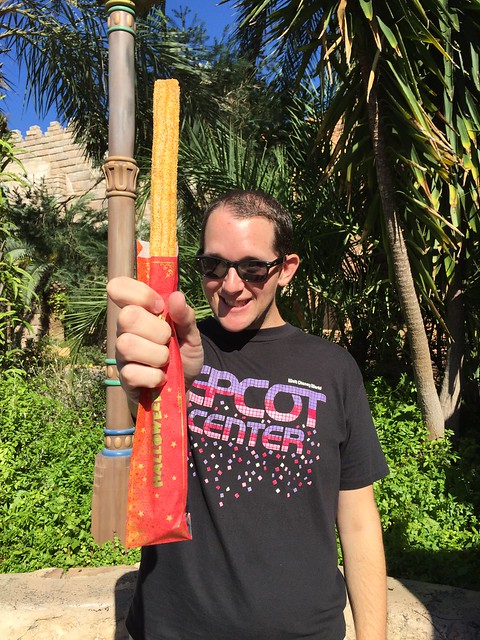 Later we found cart selling pumpkin churros so you know I had to have it. I think I ended up buying every pumpkin snack we ran in to. So good. 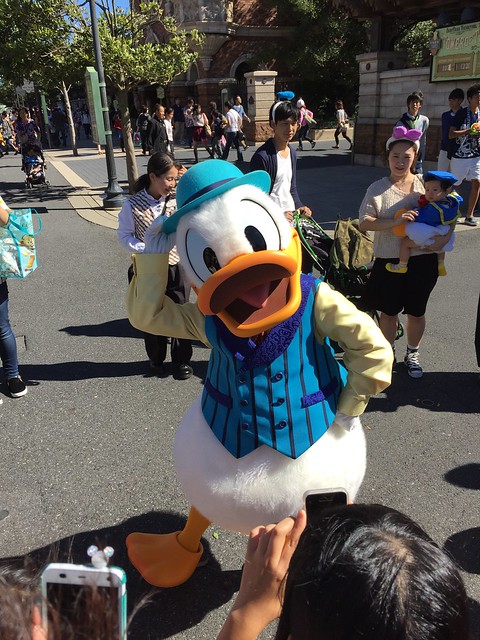 The Disney characters have land-specific costumes for each land in DisneySea. Here’s American Waterfront Donald Duck. 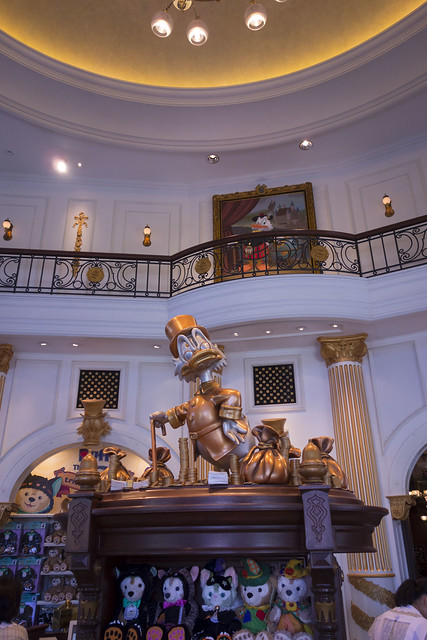 Speaking of American Waterfront, this ended up being one of my favorite lands in Tokyo DisneySea. It’s themed after a turn of the century waterfront town. One of my favorite aspects of it was that almost every building had a really nice interior to explore. Pictured above is McDuck’s Department Store. 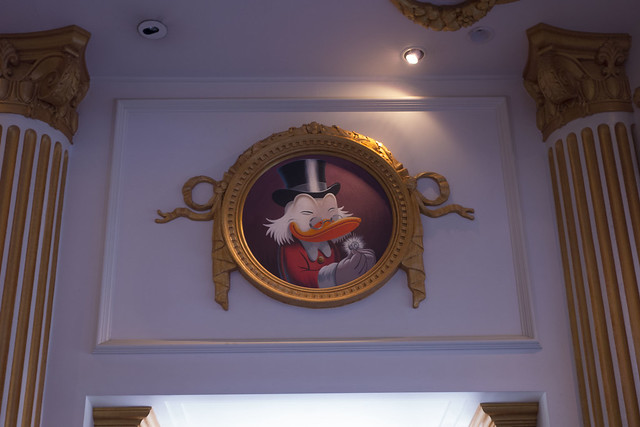 McDuck’s Department Store’s decorations are lavish but then next door is McDuck’s Pawn Shop. 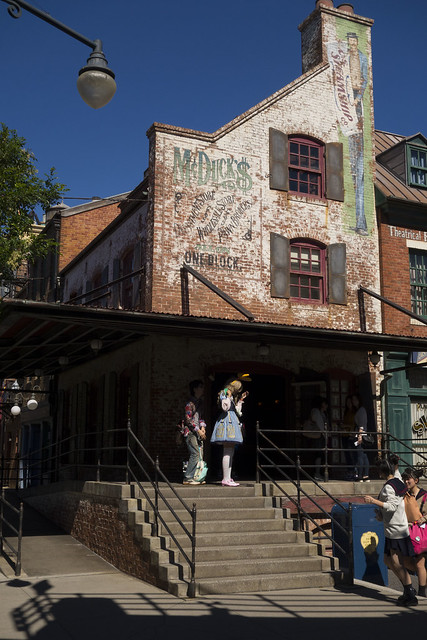 The pawn shop is run down and dingy. The upscale department store and the drab pawn shop go great together and are faithful to the Scrooge McDuck character. 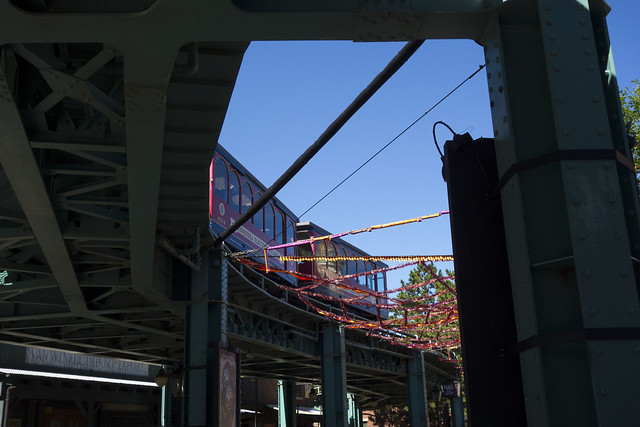 And now on to the meat and potatoes of American Waterfront, IT’S FILLED TO THE BRIM WITH TRANSPORTATION RIDES!!! Above is the DisneySea Electric Railway. It’s a trolley that takes you from American Waterfront to Discovery Bay. The views are to die for. 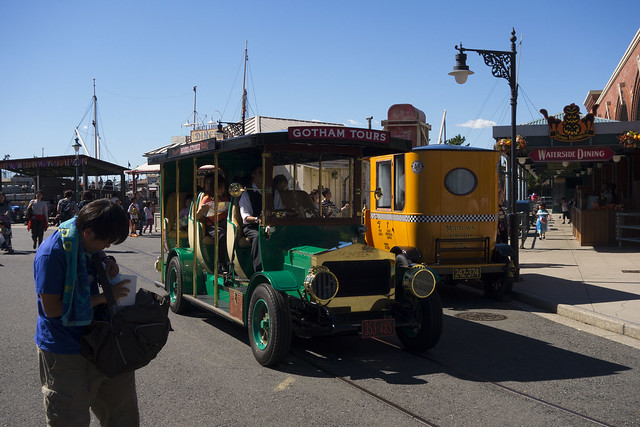 American Waterfront also has a fleet of vehicles known as Big City Vehicles. Anyone who knows me knows that I love Main Street transportation vehicles at Disneyland and Magic Kingdom, so you better believe that I was freaking out when I saw them at DisneySea. 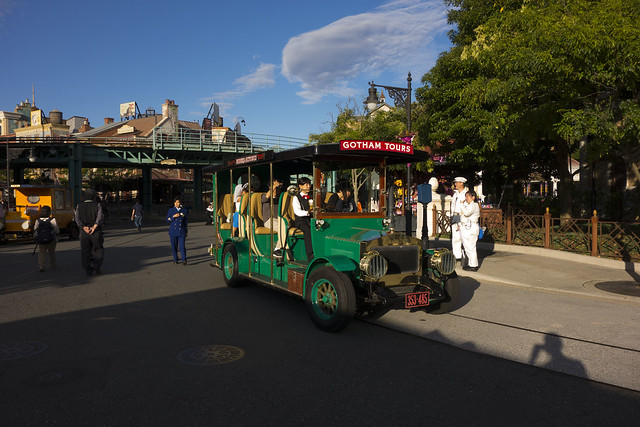 People seem to really enjoy them! 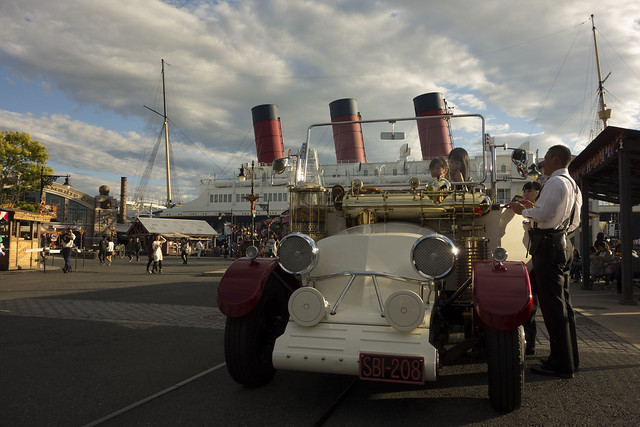 Transportation attractions are not only fun to ride, but they add a lot to the environment. Plus they’re nice to look at. 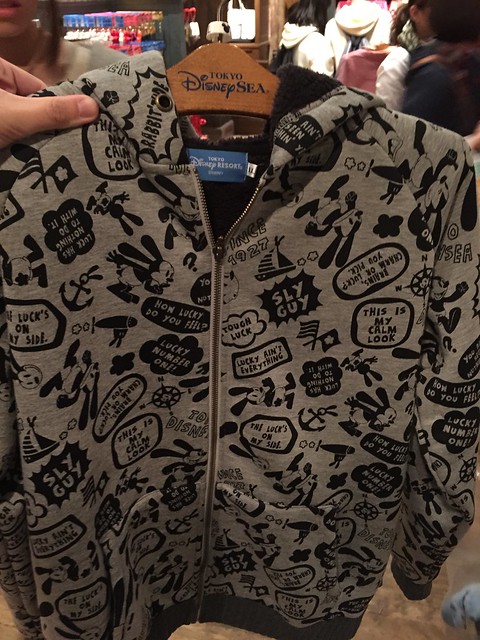 American Waterfront is also home to a store that stocks a ton of exclusive Oswald merchandise. I wanted this hoodie SO BAD. But unfortunately it was not in my size. I wear a Large in American and this was labeled “3L” which was their biggest. I assume that’s their version of XXXL but it still didn’t fit me. 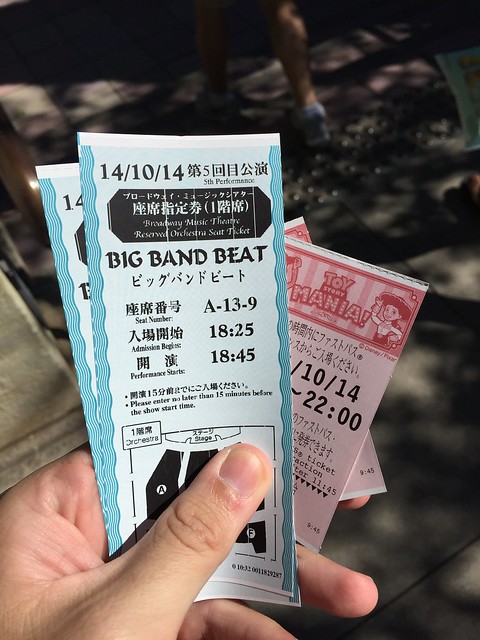 At this point we needed to try our luck at the Big Band Beat ticket lottery. Tom and Sarah had been hyping this show up quite a bit so it was on my must see list. I’ll talk more about that later. Anyway the lottery is actually a pretty cool system. You make your way to a location and scan your ticket, then a slot machine-style animation comes on screen and it tells you if you “won” a seat or not. A stand by line is also available but Tokyo Disney guests line up hours before almost any show. Luckily we won and had our seats locked in for the 5th performance of the night.

With our Big Band Beat tickets locked in it was time to make our way back to American Waterfront and get some food. I’ll cover that and a whole lot more in the next chapter of this trip report!