Disney News Magazine was something I treasured as a child. I would wait for every issue with almost as much anticipation as going to the parks themselves. Whenever I revisit this magazine I realize that 1, the content still holds up, and 2, they are a treasure trove of Disney obscura and oddities. Here today I present to you 11 things you need to see from the Fall 1990 issue of Disney News Magazine. 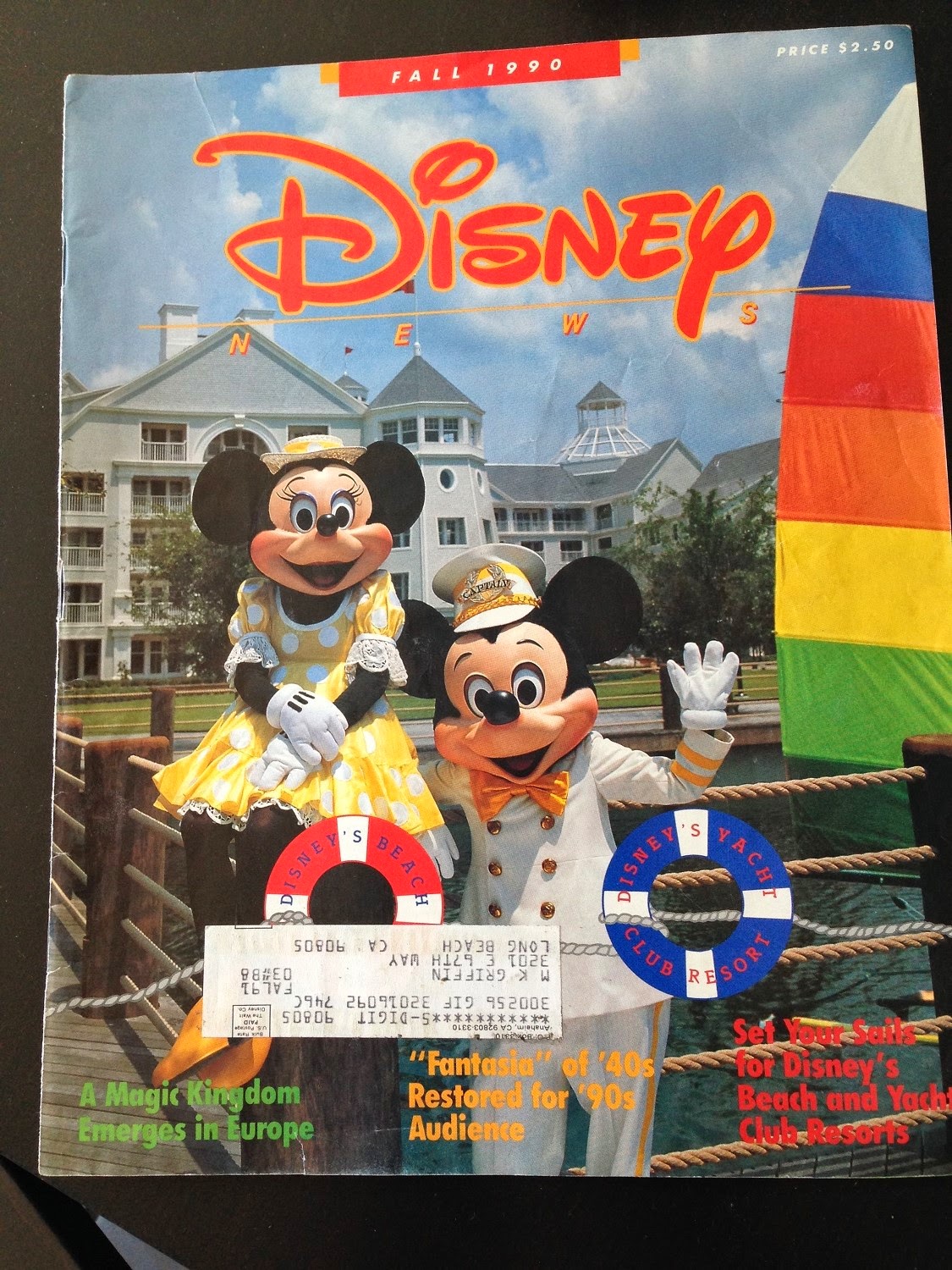 This issue was released just as Disney’s Yacht & Beach club had opened in Walt Disney World. Check out Mickey’s fantastic captains outfit. Also of note in this issue was some of the first information released to the public about Euro Disneyland. That address label shows the address of the house I grew up in and my grandma’s name.

2. Disney trying to make their theme park food not so bad for you 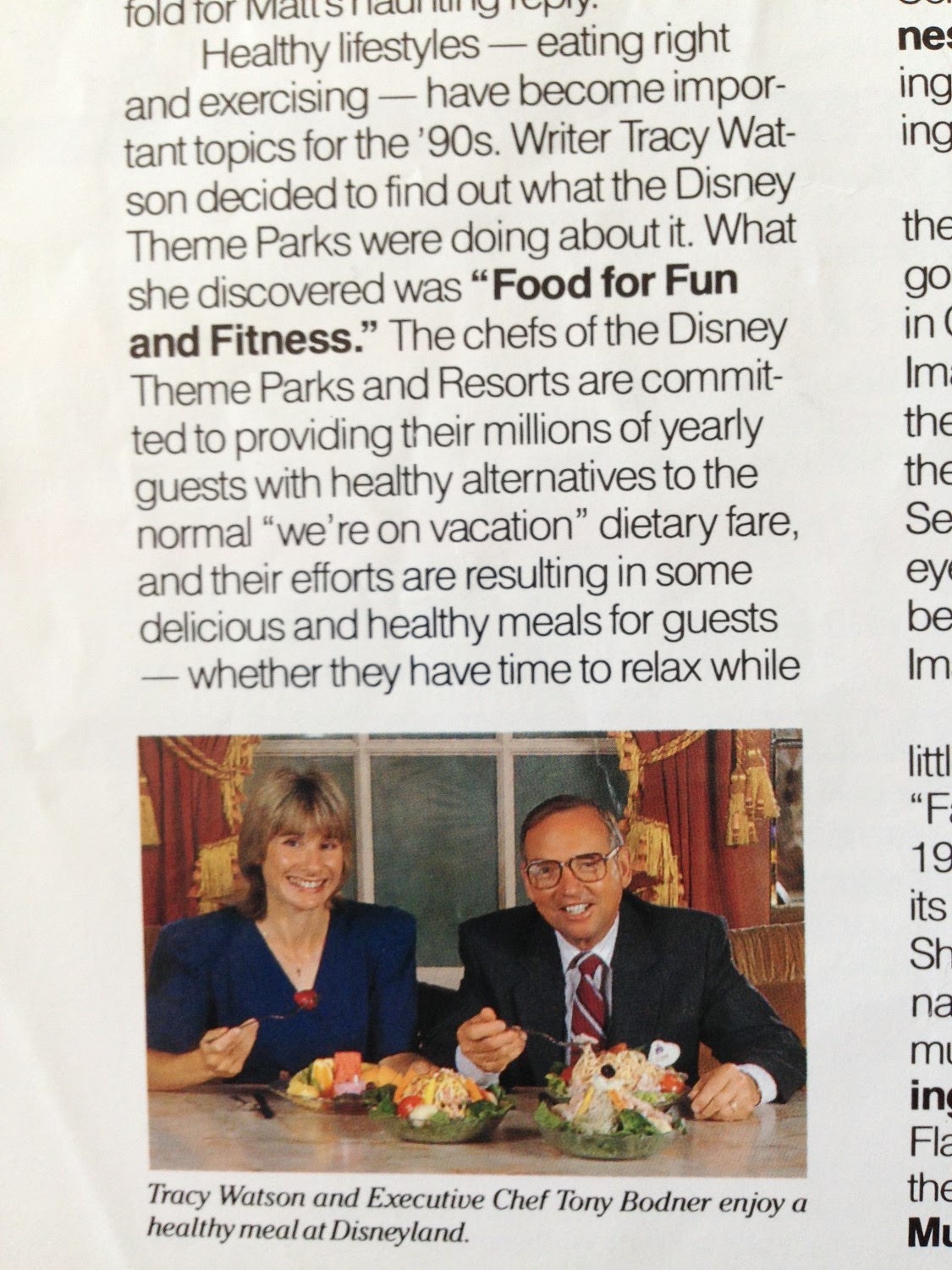 I included this mostly because of the picture that was included in the article. I like that the article is about healthy food, but the picture was taken inside Plaza Inn. Which menu is made up of one salad (covered in bacon and cheese) and three other extremely unhealthy entrees.

3. The mailbox we wish we all had 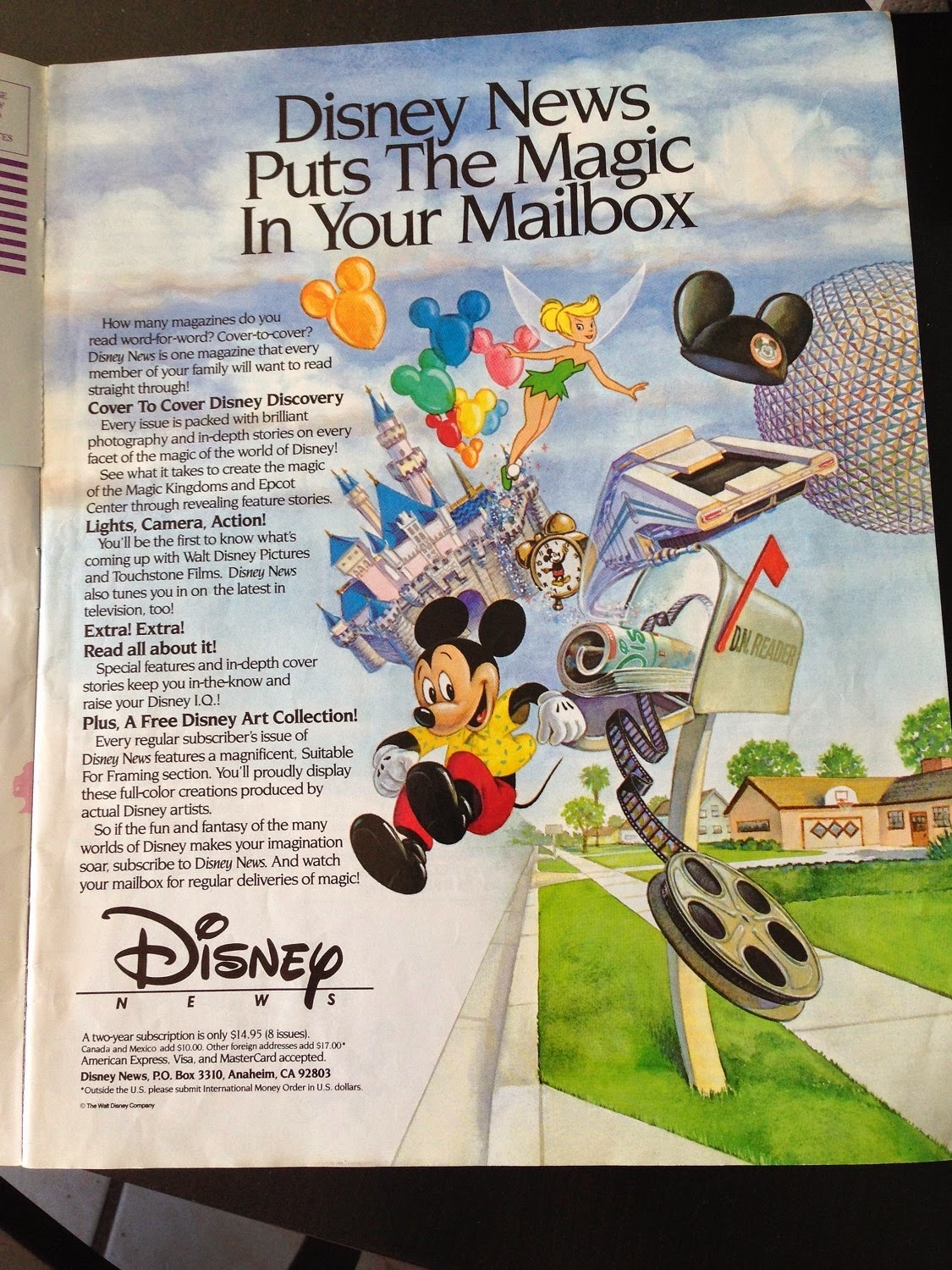 Life would be so much better if there was an explosion of Disney theme park icons every time I opened my mailbox.

4. Before the internet, we wrote letters 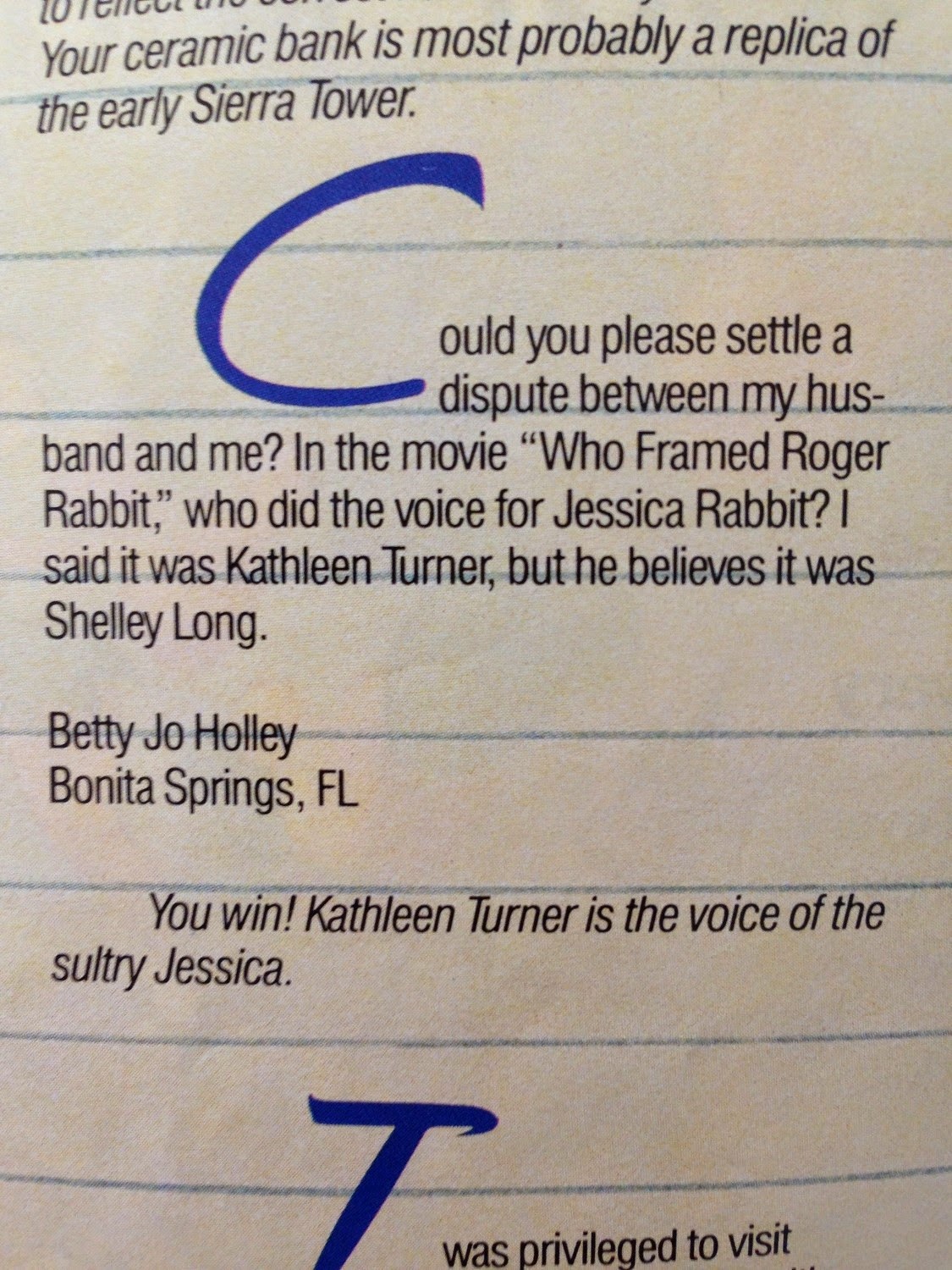 This couple was arguing over the voice of Jessica Rabbit. Their relationship probably took on tremendous stress as they waited for months to see if Disney News would answer their question. As the months went on the arguments grew more fierce. Without the internet and IMDB they couldn’t look up the film credits, and Who Framed Roger Rabbit wasn’t out on video yet! Just as their constant arguing reached a boiling point and their marriage was on their last legs, the new issue of Disney News arrived. The couple opened their mailbox and somehow dodged all the items seen in the previous picture. They frantically flipped through the magazine to get to the reader mail section and found a response to their letter. Miraculously Disney News finally answered their question and the argument was settled. Betty Jo Holley and her husband are still together to this day, and their bond is stronger than ever thanks to Disney News. 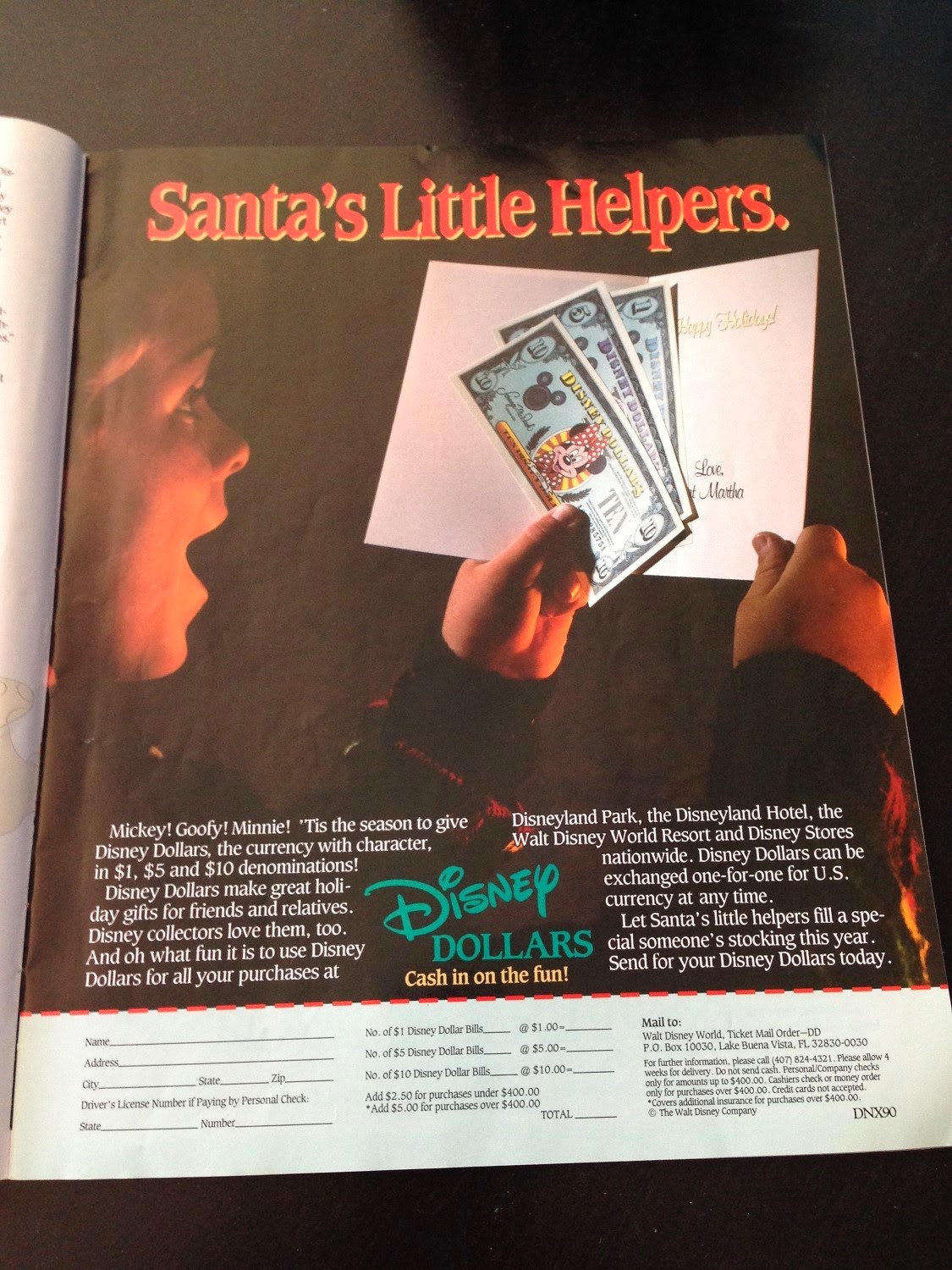 Aunt Martha really made this kid’s day. But here’s what I don’t understand about Disney Dollars. They’re actual currency that can be used in Disney theme parks, right? But what if you aren’t going to a park anytime soon? Do you just save them as collectibles? If you are going to a Disney park soon, why wouldn’t you just buy them there and save on shipping? I guess I’m over thinking this. 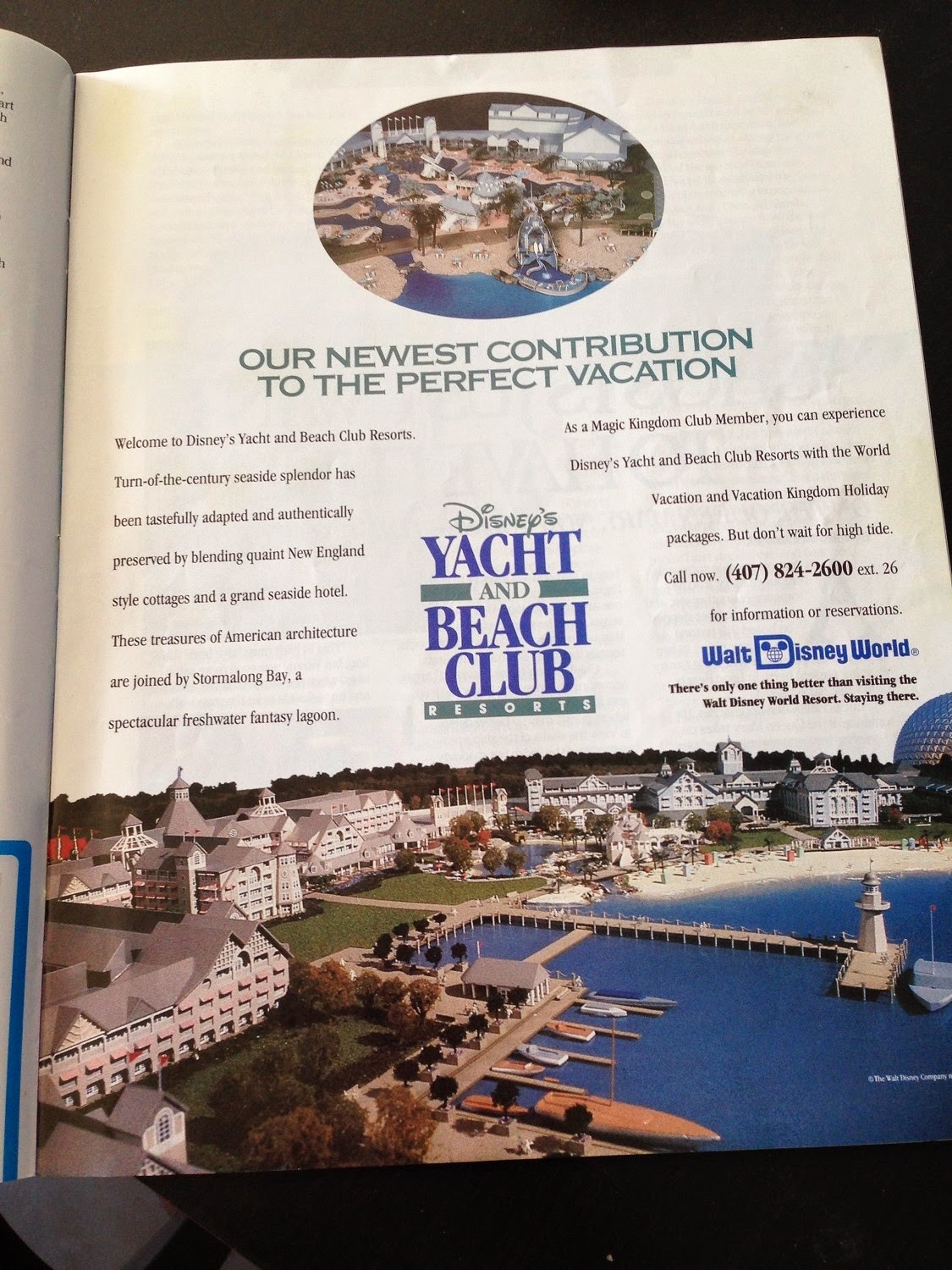 It’s weird to think that Disney’s Yacht & Beach Club Resort is almost 25 years old now. I included this not because the ad is anything too spectacular. I included it because I really like like Disney models. This page includes pictures of two of them!

7. The Rescuers Down Under/Haunted Mansion crossover 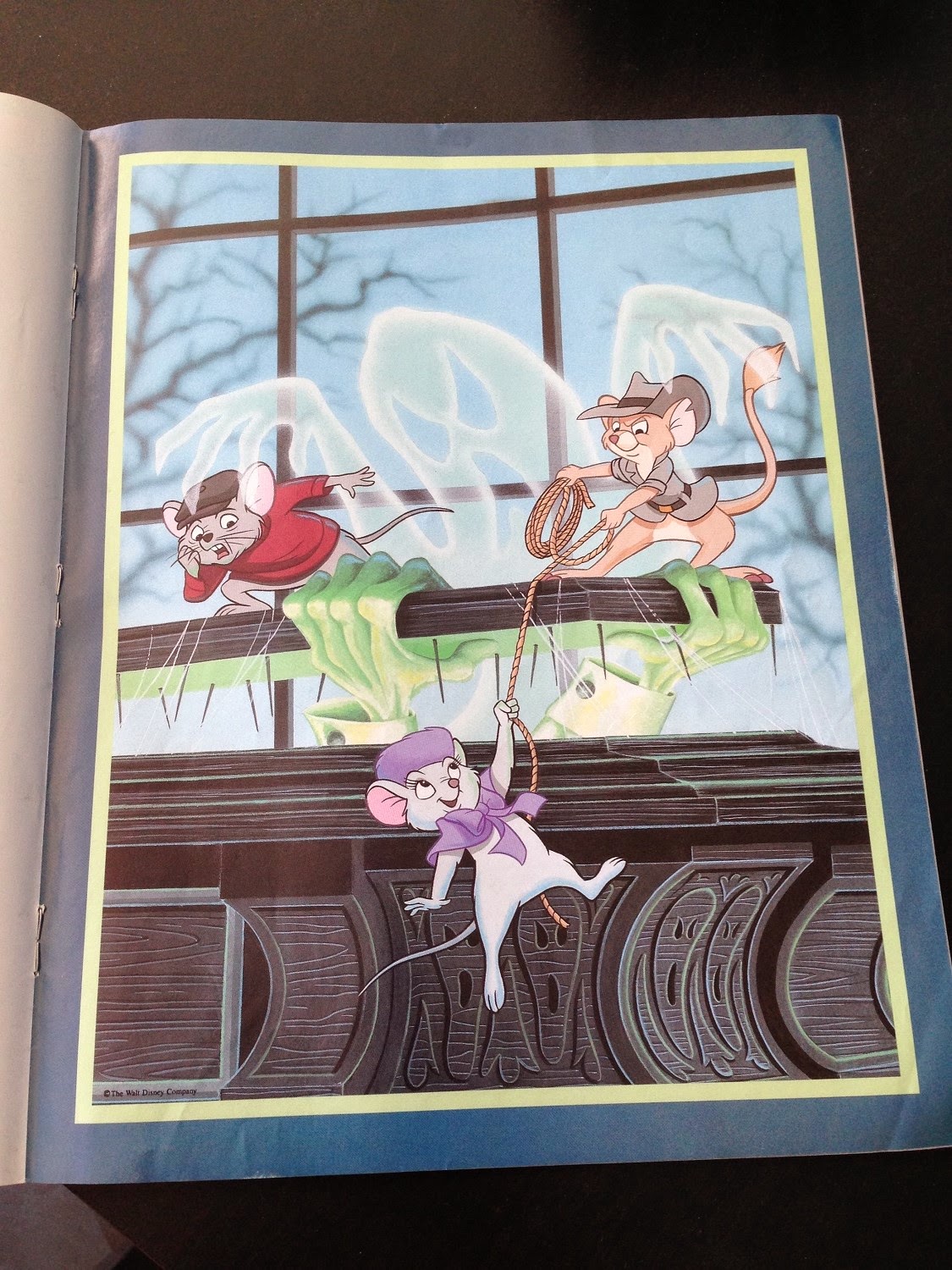 We’ll never know what kind of wild adventures the Rescuers would get to inside the Haunted Mansion, but this drawing may help spark some ideas. 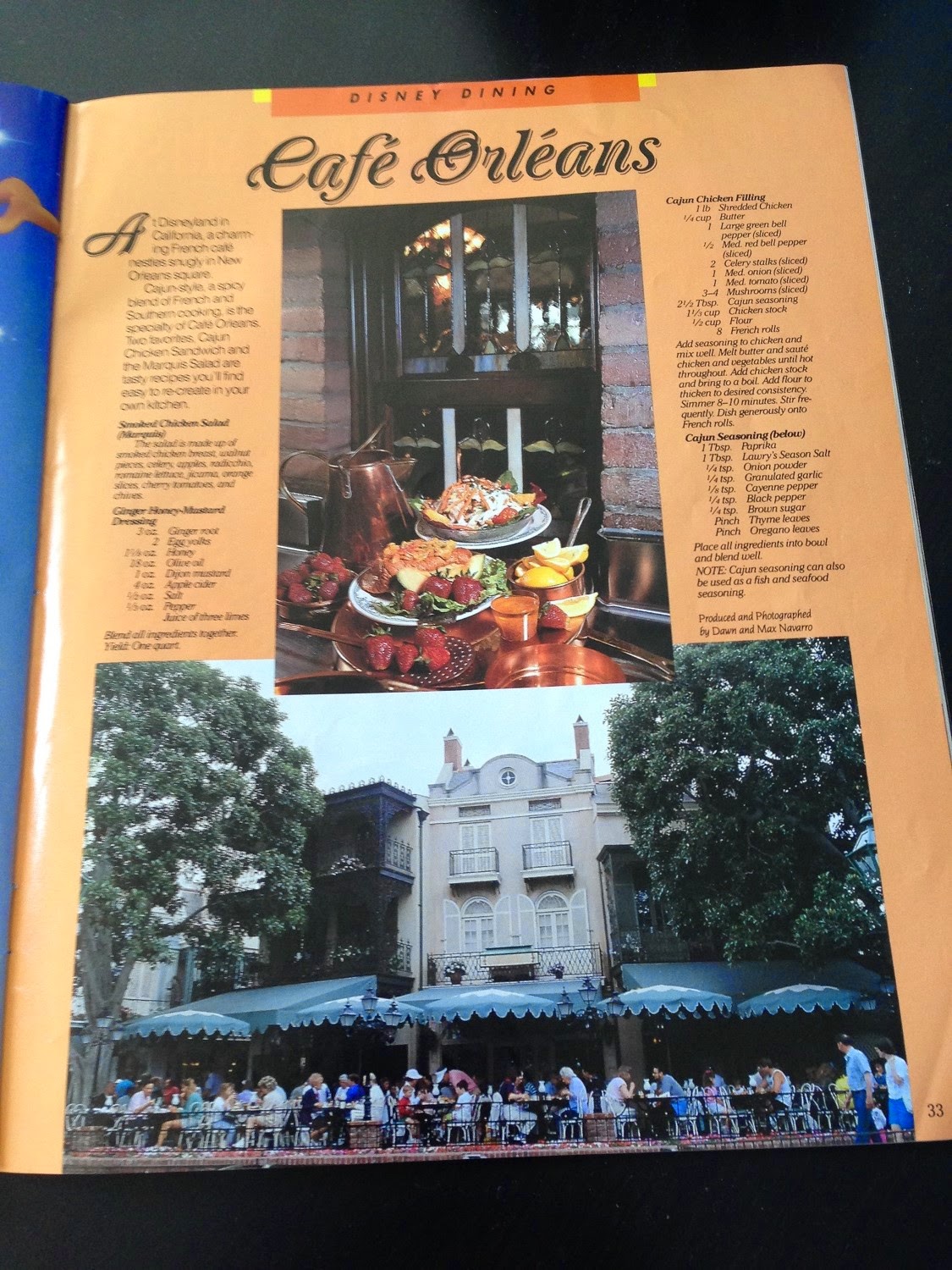 Mark my words, someday I will recreate this (or some other old recipe from Disney News) and post it on this blog. 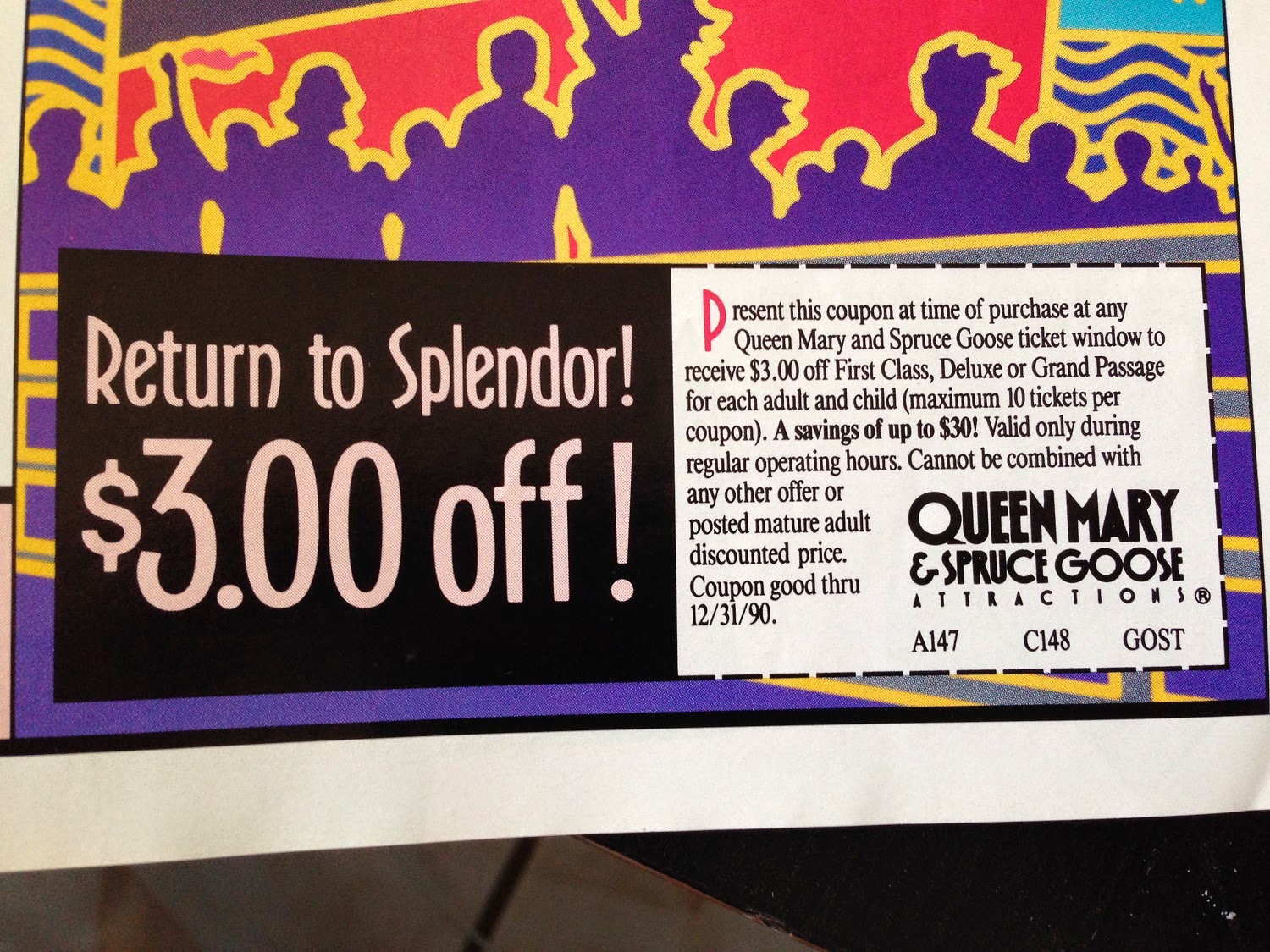 This probably wont be of interest to any of you, but I grew up in Long Beach California and love the town very much. Queen Mary is basically our icon, even though it’s something you really only visit when you’re a kid. At one point Disney actually owned the Queen Mary (and the Spruce Goose next door). The company obtained the Queen when they purchased the Wrather Corporation in 1989. The only reason why they purchased the company was to gain ownership of the Disneyland Hotel, which was owned by Jack Wrather from 1955 to 1989. 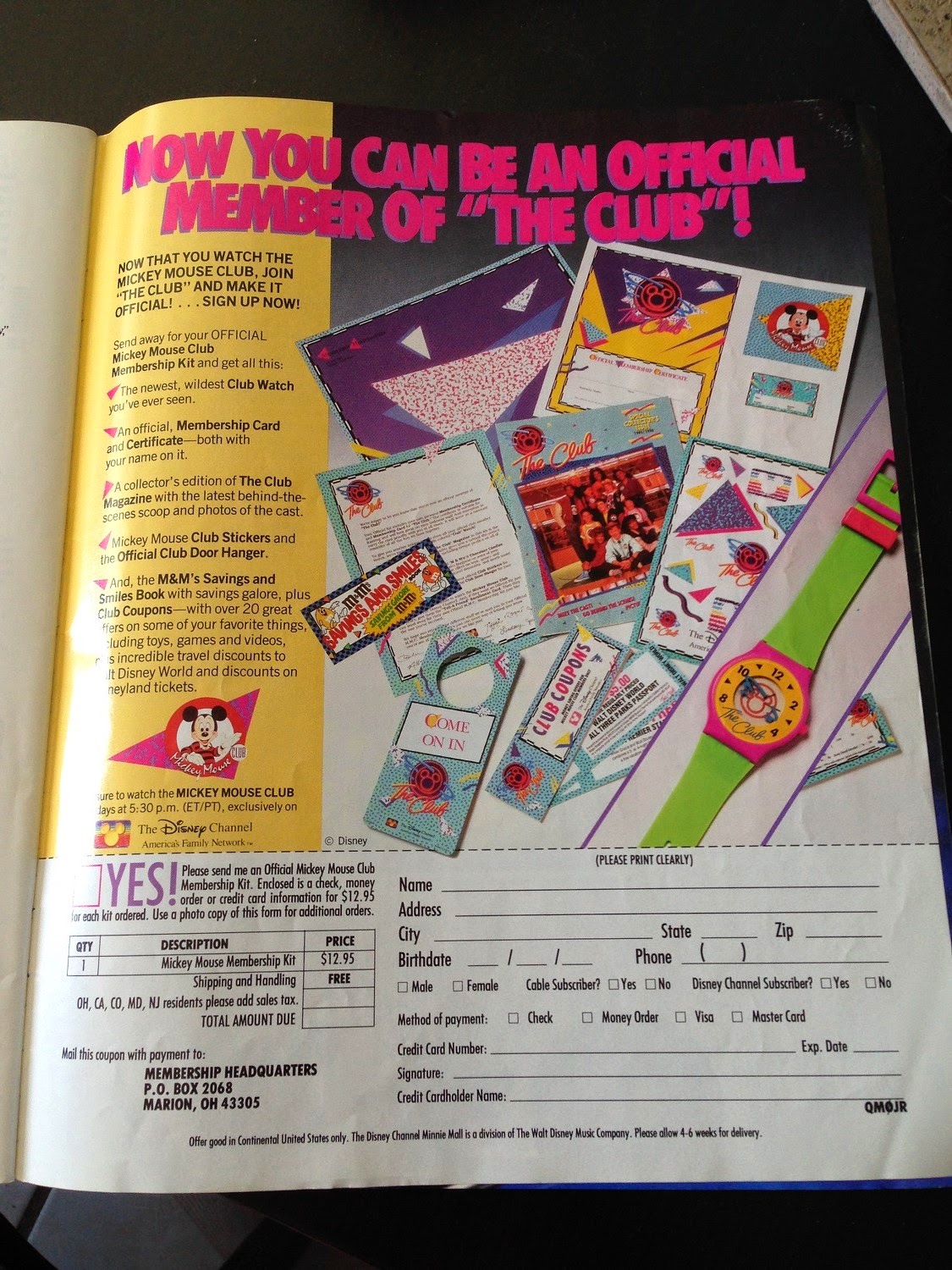 Apparently Disney thought the Mickey Mouse Club was popular enough in 1990 to simply call it “The Club.” I’m not sure if it was but I can’t deny that $12.95 was a bargain for all the crap you get for joining. I don’t know if you can see it, but one of the items is a $5 off coupon for a Walt Disney World ticket. I would have paid $13 bucks for the watch alone! 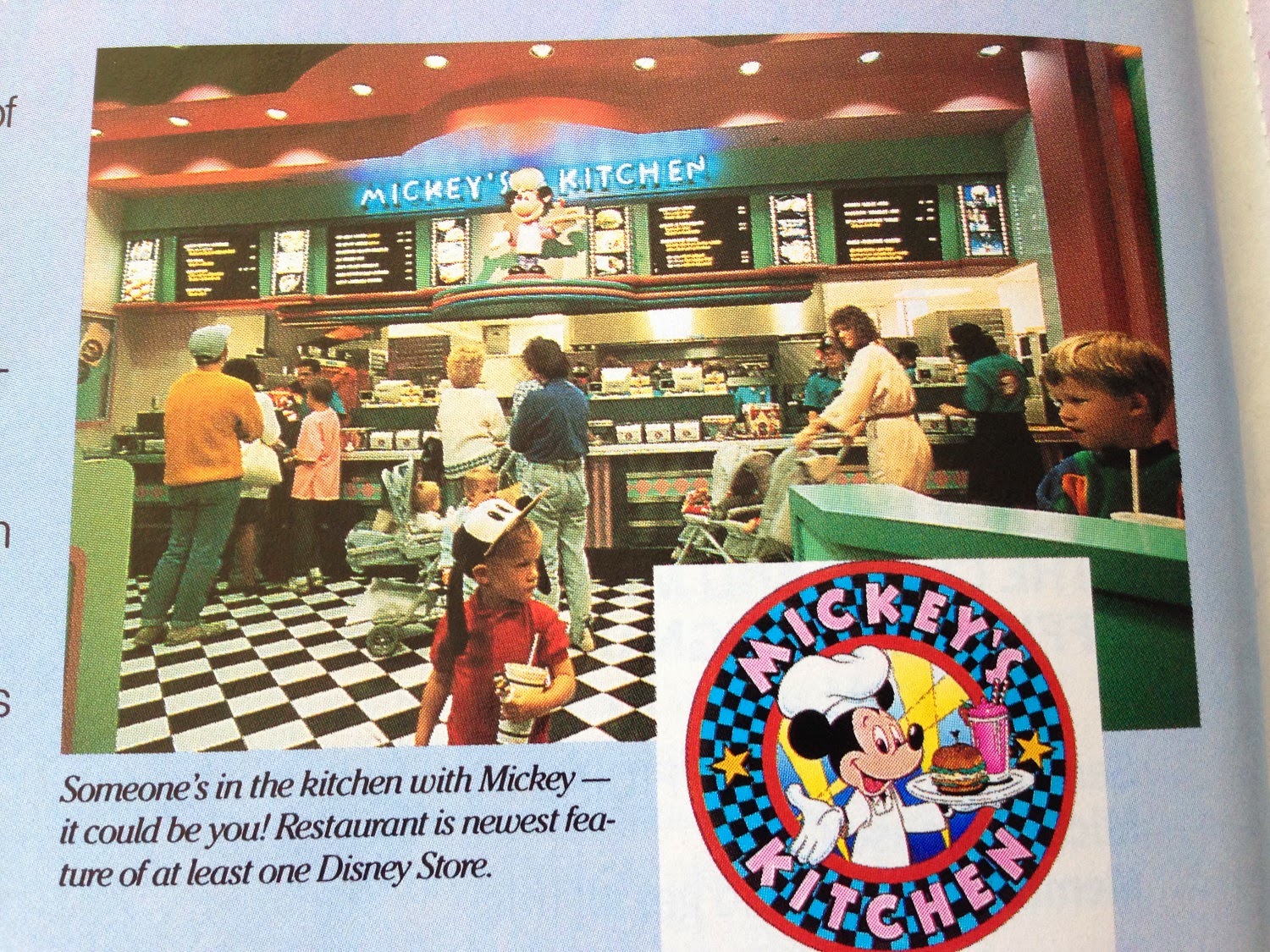 I remember reading about Mickey’s Kitchen and being blown away. I thought “Disney food in a mall! How cool!” But as an adult I realize this probably just meant that low quality theme park food was made available for theme park prices, but not in a theme park. I’m not surprised this experiment failed. I posted about it on Twitter and several people shared stories about how they had one near them but their parents never let them eat there. Anyway, Mickeys Kitchen lasted for a couple of years before it’s two locations were closed forever. 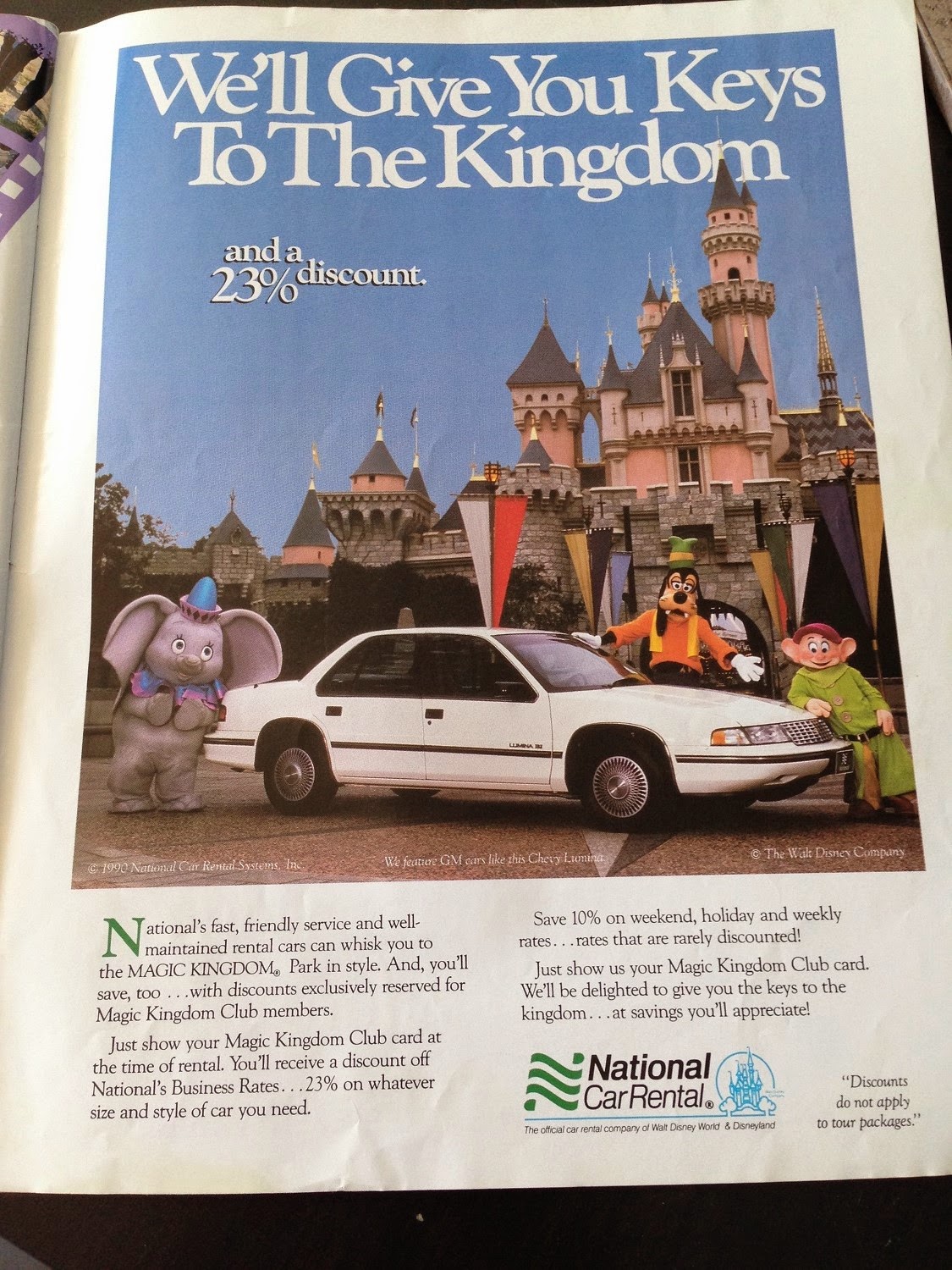 I bet you never thought you’d see a bulky early 90s mid-sized sedan parked in front of Sleeping Beauty Castle, but there it is. Thanks National Car Rental for making our dreams come true.