Skip to content
Matt over at Studios Central loves Disney’s Hollywood Studios. He loves it so much that he does something called International Hollywood Studios Awareness Week every year. I contributed a couple of posts last year, and those ended up being my only Disney Hollywood Studios posts of the year (sorry Matt). So now I’m back again with another vintage map.

The cover is dedicated to the Studios biggest draw during the holiday season, the Osborne Family Spectacle of Lights. Notice the nice director Mickey at the top. 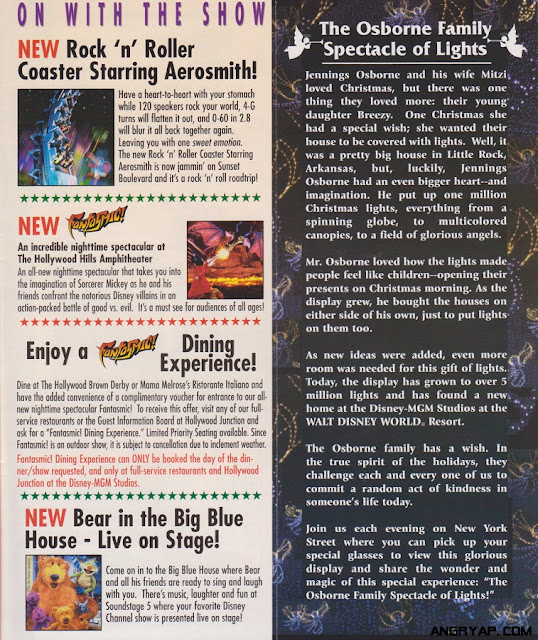 Inside we find the newest attractions the Studios has to offer. The Rock ‘n’ Roller Coaster, which opened in July of 1999. Fantasmic which was just over a year old at this point (Fantasmic at Disney-MGM Studios opened in October of 1999 while Disneyland’s opened in May 1992). Also seen is the now extinct Bear in the Big Blue House Live on Stage. To the right is some nice information on the Osborne Lights. 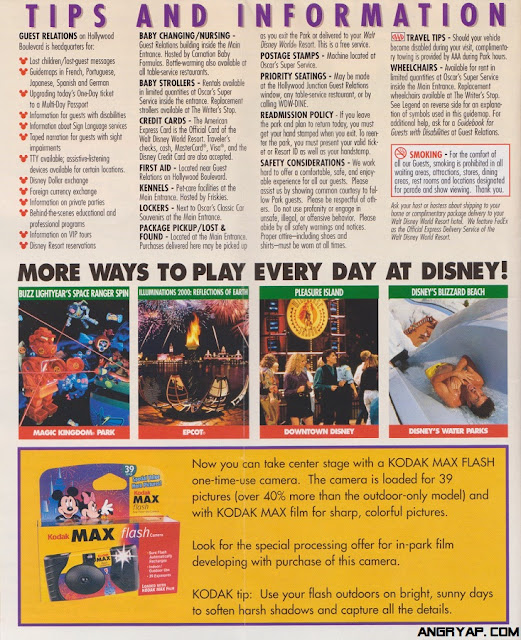 Lots of the usual theme park information on this page.

Show times. 4 of the 7 shows/parades on this page are now extinct. Hunback of Notre Dame, Doug Live, and Bear in the Big Blue House Live on Stage are all long gone. Notice the character greetings section at the bottom. I think they left out the “S” in the “Toy Story Friend” line. 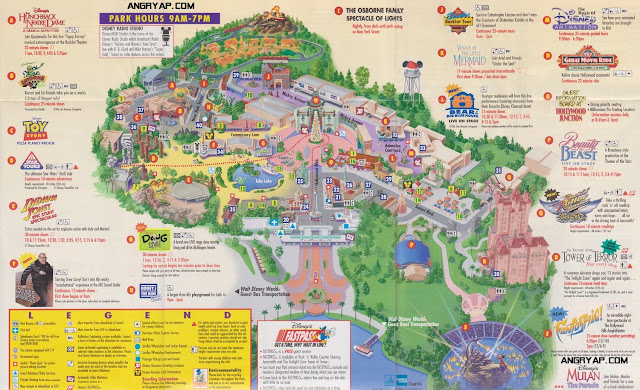 (click to enlarge)
Nice looking map with a surprising number differences to the current Disney’s Hollywood Studios. Near the top you can see the residential street section of the backlot tour which is now completely removed (Lights, Motors, Action Stunt Show now sits in its place). Residential Street was the former home of the Osborne Lights. It was moved the the Streets of America (formerly New York Street) after the Residential Street was removed. The center of the park shows the area now currently occupied by the Sorcerers Hat. A large Christmas tree is in its place. Behind the Chinese Theater you can see Mickey Avenue, the street that now is home to Pixar Place and Toy Story Midway Mania.

The back of the map shows the usual Kodak disposable cameras. Surprisingly guide maps still advertise Kodak disposable cameras on the back! Even more amazing is I still see people using them in the parks!
That’s it for my contribution of International Studios Awareness.  Tip of the hat to Matt for scheduling it during the week when every Disney blog on the internet has its focus on Disney California Adventure’s new Cars Land 😉