As I was preparing for today’s update I said to myself “I want to post something really obscure.” Well, it doesnt get more obscure than a pamphlet for a Disneyland POG promotion. For those of you who don’t know what POGs are (or are acting to cool to remember) here is the link to the Wikipedia article describing the game. Naturally Disneyland (and even Knott’s Berry Farm) wanted to capitalize on the fad so they offered an exclusive Disneyland POG set  (4 pogs and a slammer) to kids under 13. I have them around here somewhere but I can’t find them (and for that reason I have failed you) but this site does have scans of the set! A big part of the promotion was the all day POG tournament which was held in the area near the Motor Boat Cruise. 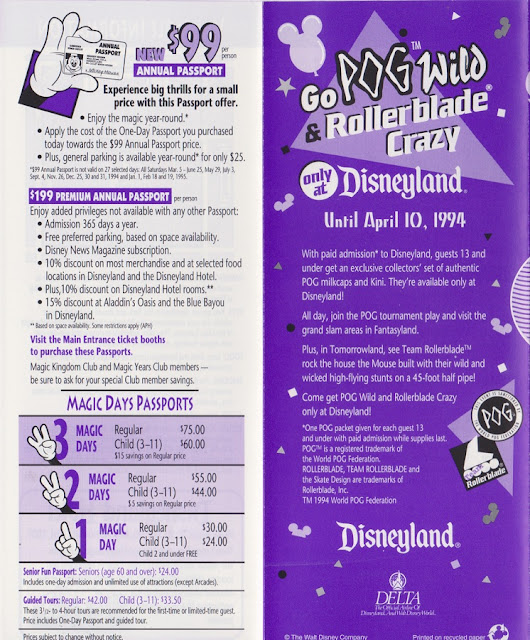 Another part of this promotion was “Rollerblade Crazy” where guest could “See Team Rollerblade(TM) rock the house the Mouse built with their wild and wicked high-flying stunts on a 45-foot half pipe!” Wow… Also take a look at the ticket prices in 1994. $30 for a single day ticket! 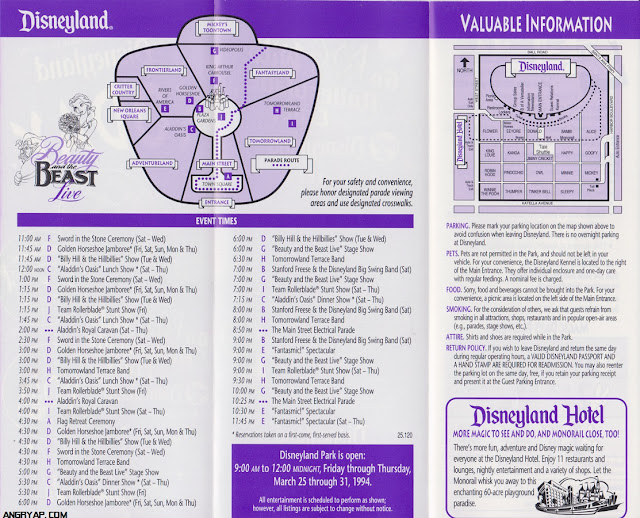 All joking aside, that live entertainment schedule is jammed packed. As for the Team Rollerblade half pipe I can’t find any pictures of this on the internet, and hardly any mentions of it. I don’t even remember watching the show but using the map it *kind of* of looks like the half pipe was located in front of Mission to Mars or possibly the empty America Sings/Carrousel of Progress building. If you have a picture of the half pipe please post it in the comments!

So there you have it. The “Go POG Wild & Rollerblade Crazy” promotion lasted less than a month and was never heard from again. On a personal note I experienced Pog Wild on March 26th 1994, my 11th birthday. Like most kids my age I was absolutely nuts for POGs and Disneyland so at the time I probably thought that my life couldn’t get any better. Little did I know, 17 years later I would be blogging about it on the internet! Dreams really do come true!