Skip to content
What’s that you say? You want to see a Disneyland map from this week 15 years ago? Okay, here we go…

The summer of 1996 was the final season of the Main Street Electrical Parade. Or so we thought, the parade would eventually return to Disney’s California Adventure in 2001. But in 1996 many Disney fans like myself thought it actually was “glowing away” so we bought overpriced trinkets like this.

(click to enlarge)
Lot of things to point out on this map. Notice the advertisement for Mickey’s Halloween Treat (then in it’s second year of existence). Also notice the Esmeralda clip art advertising Hunchback of Notre Dame finger puppets (I wish I had one to scan for you). I say this every time I scan a map but wow look at how awesome Tomorrowland was, even this late in the ’90s. I’d also like to point out one thing I’ve never noticed before:

Out of all the maps I have in my collection, the ones from 1995 and 1996 are the only ones that warn of strobe lights being used in the attractions. Notice that the little light icon is listed on attractions like Mr. Toad’s Wild Ride, Space Mountain, and Captain EO. It’s weird that this was even mentioned. 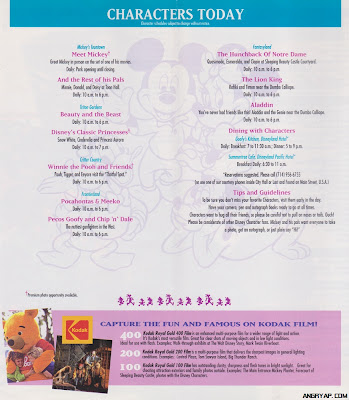 As always, the Kodak advertisement brings.