Prologue:
It’s July 5th 2011 which means that exactly 15 years ago I was on my first trip to Walt Disney World. I’ve blogged several times about the year that was 1996 in WDW (see my other posts on 1996 at the bottom of this post). This trip will always stand out as one of the best moments in my life. Not only was it one of the best moments of my childhood, but I got to experience it with my “second family” the Overtons. My good friend Roger (whom I met on the first day of first grade way back in 1989!) and his parents Duane and Anna. I’m still friends with the Overtons, and Roger has a blog and even wrote a couple of books!

We’re going to Florida:
As a reward for completing elementary school my grandma and Roger’s parents surprised us with a trip to Walt Disney World. We went on the insanely busy and hot 4th of July week, I believe the exact dates were July 1 to 5. Roger and I were insanely anticipating this trip. Even at this young age we were both long time Disneyland veterans and annual pass holders with dreams of some day visiting the Orlando parks. You’re probably wondering why I called this post “the worst retro trip report ever” That’s because I was 13 and was an ABSOLUTELY TERRIBLE photographer. Interestingly enough I have never seen Roger’s photos from this trip. I wonder if his turned out better than mine did.

Why I suck:
Yes, these photos are terrible and mostly uninteresting. But why do I really suck? I didn’t take any pictures of my trip to Epcot… No pictures of the Living Seas, original Journey to Imagination, Test Track under construction, the semi-new Innoventions, and most of all, Horizons. You read that right, I didn’t take any pictures of what instantly became my favorite Disney attraction of all time. Little did I know it would close 3 years after my visit and I would never get to ride again. 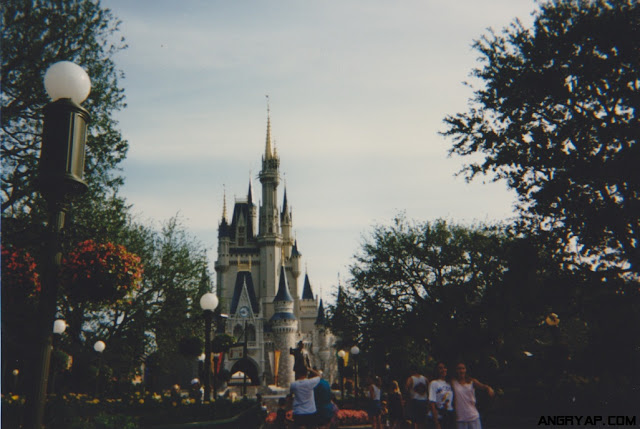 I’m off to a good start quality-wise. Here is the Cinderella Castle. We were lucky, this was only three months before it was transformed into the hideous and controversial birthday cake castle for WDW’s 25th anniversary. I noticed the hub looked great back then! The partners statue is surrounded by beautiful mature trees that are now long gone. 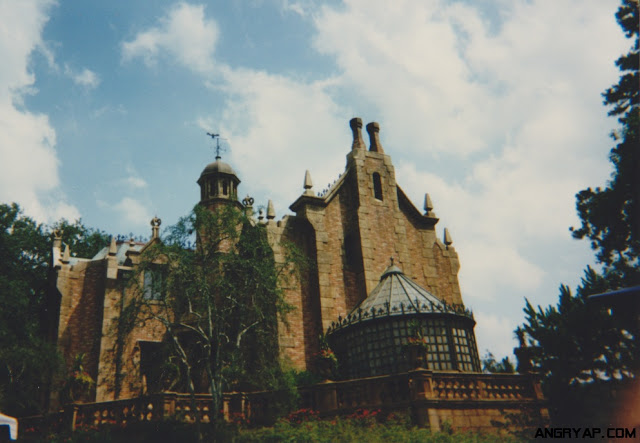 The Haunted Mansion was also looking good back then! 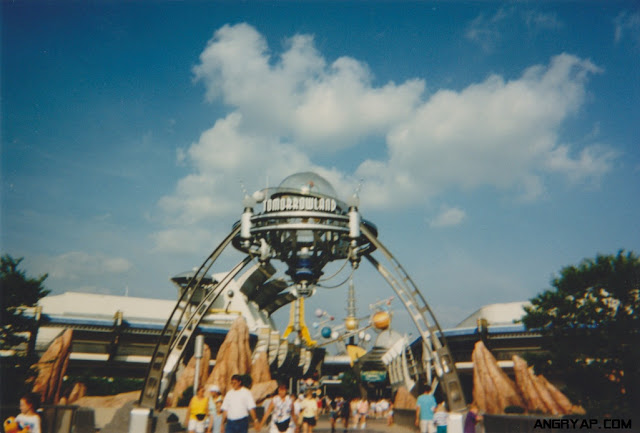 I remember seeing Magic Kingdom’s new Tomorrowland and thinking “Wow, some day Disneyland will get a nice new Tomorrowland like this!” If only I could go back in time and tell my 13 year old self to not get my hopes up. Also experienced on this trip was the amazing Alien Encounter. I wish we would have saw it more than once because now its gone forever. Amazingly, these three pictures are the only ones I took in the Magic Kingdom. 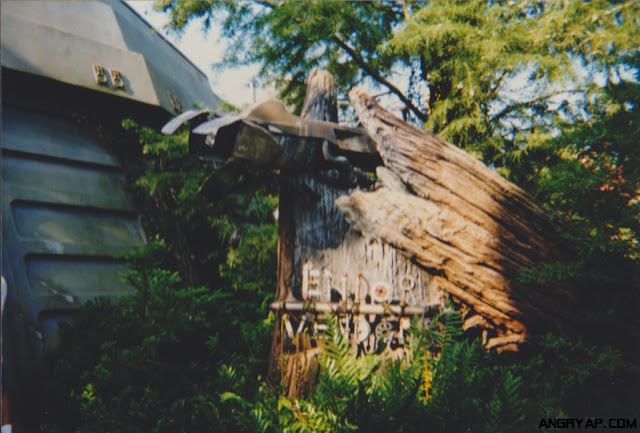 On to the Disney-MGM Studios! I enjoyed this park a lot more in 1996 than I currently do. Super Star Television, and the animation tour stand out in my memory as great attractions so it only makes sense that they are both now closed… 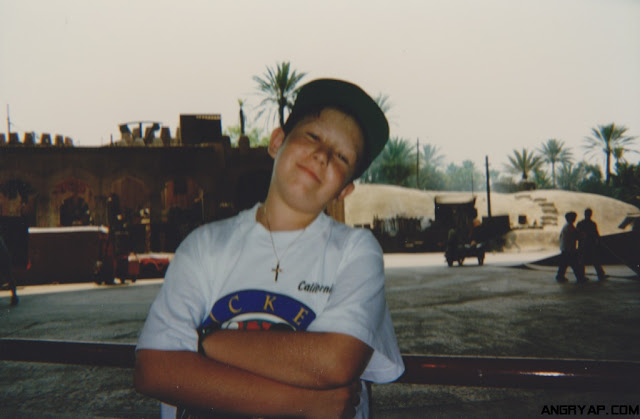 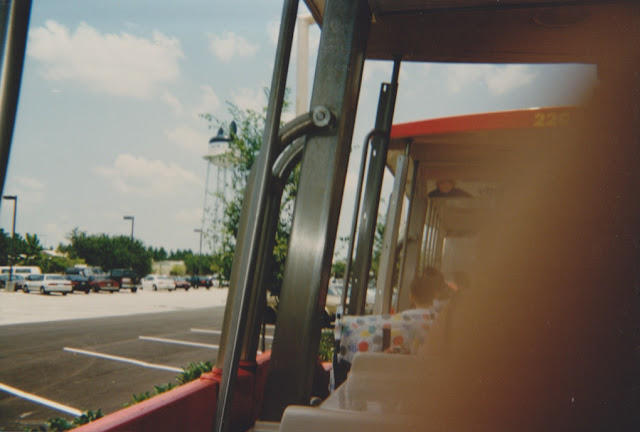 The only picture I got of the world famous earful tower has my giant fat finger covering half it. Awesome! 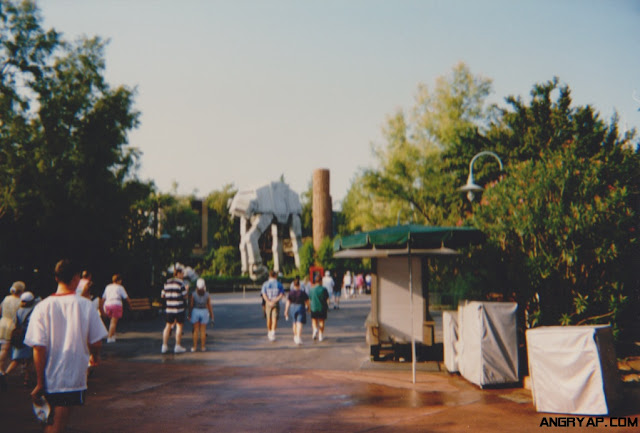 I could probably go to the Studios today and take the exact same picture. 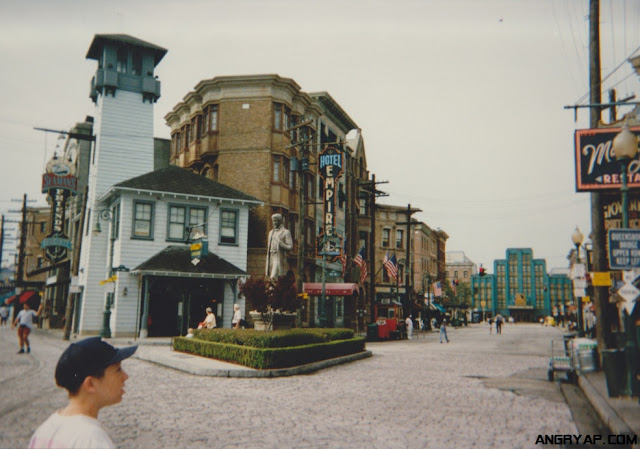 We also visited Universal Studios Florida. I remember being very underwhelmed by this park. The only standouts were the Nickelodean Studio tour, and the Ghostbusters show. Both now gone. Lesson learned: If I like a ride or show, it will get replaced. 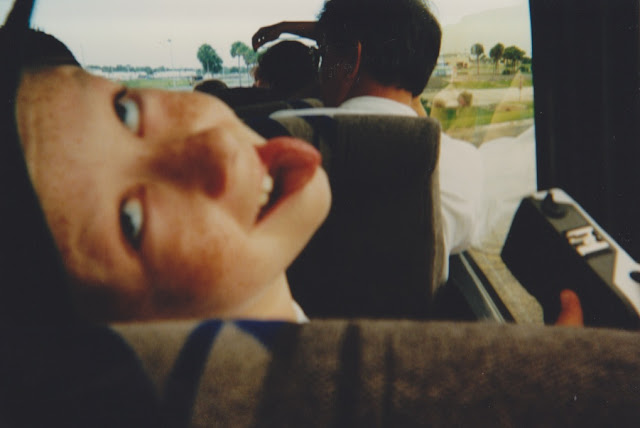 Here is Roger BEING WACKY! We are on the hotel provided shuttle. 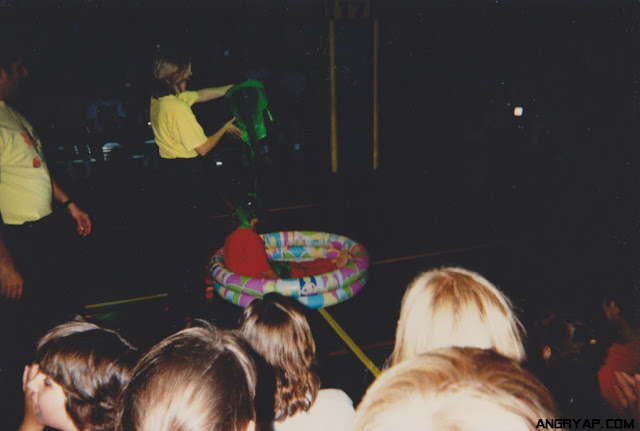 This was part of the Nickelodeon Studio tour where they would select a kid from the audience to get slimed. The only other thing I remember about this tour was that at this point Nickelodeon had obviously scaled back any production they were doing in the studios. There were no shows in production (this was about 3 years before studios were shut down) and the only thing we saw in the gigantic sound stages was the Snick couch. 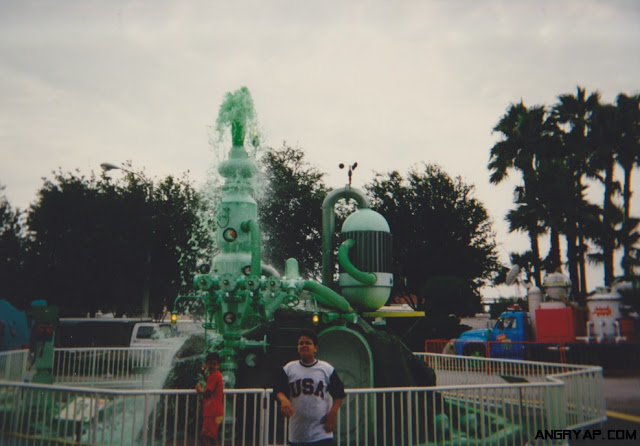 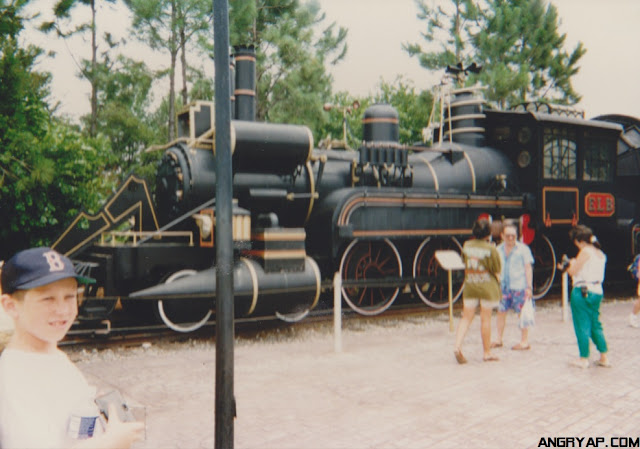 There were some cool screen-used props scattered around Universal Studios Florida. This is Doc Brown’s train from Back to the Future 3. The only thing I think of when I see this train now is Doc Brown’s creepy kid that stands on the train steps and then taps on his junk and then motions you to come to him. Don’t know what i’m talking about? Watch it on YouTube. 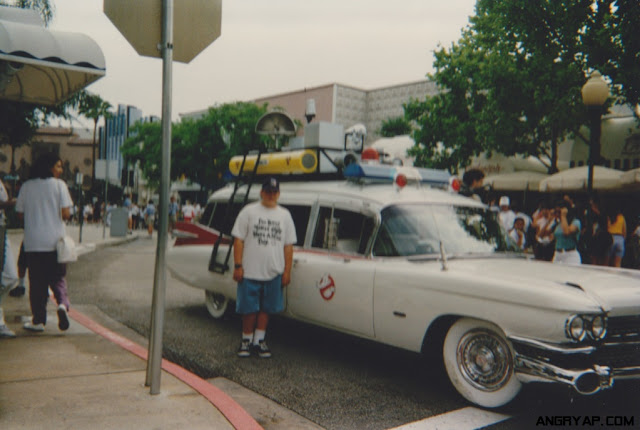 That’s me! Yes, I was fat as hell in 1996 but that’s not important right now. I’m standing next to the actual Ecto-1 from Ghostbusters! The real screen-used car would drive around USF with guys in Ghostbuster suits. This lasted up until the mid-2000s when the car was rescued and restored. 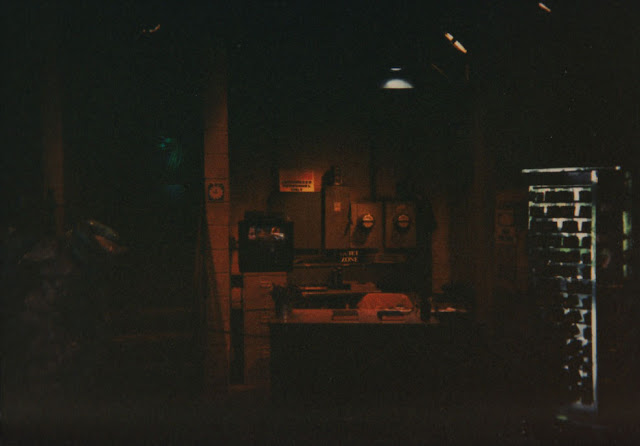 Another cool Ghostbusters artifact. The basement set from the Ghostbuster’s firehouse. 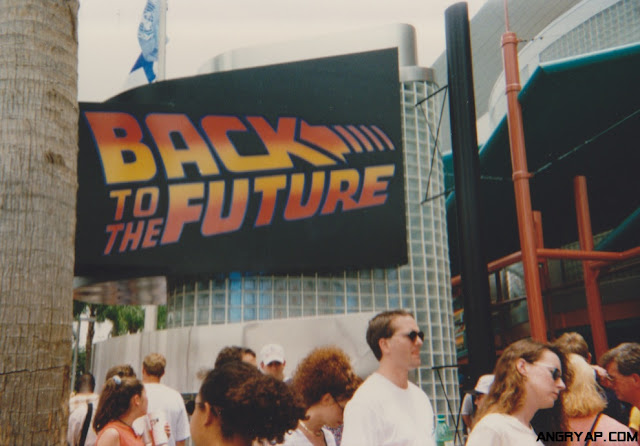 I still think Back to the Future The Ride is one of the best theme park attractions of all time. It was great to experience such a well-themed attraction that made you feel like you were in the BTTF universe. And who could forget Biff’s line from the ride “You saved my life! Buttheads!” 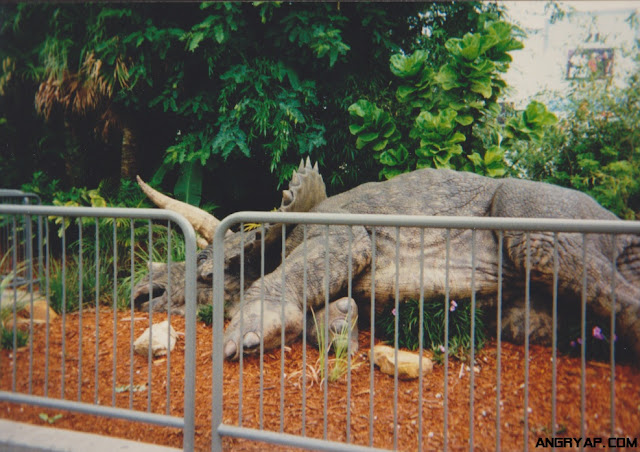 More film props. The sick triceratops from Jurassic Park! This is also been removed from the park. 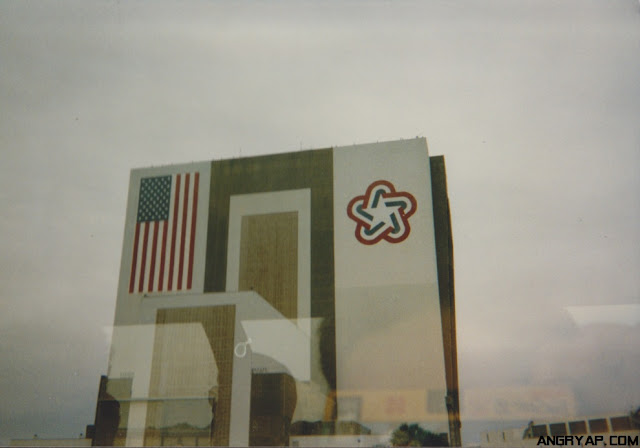 We also visited the amazing Kennedy Space Center. I’ve always been a big fan of manned space flight so this was a real treat. Seen here is the giant Vehicle Assembly Building. We also saw the Olympic torch relay run through here for the 1996 Atlanta Olympics! 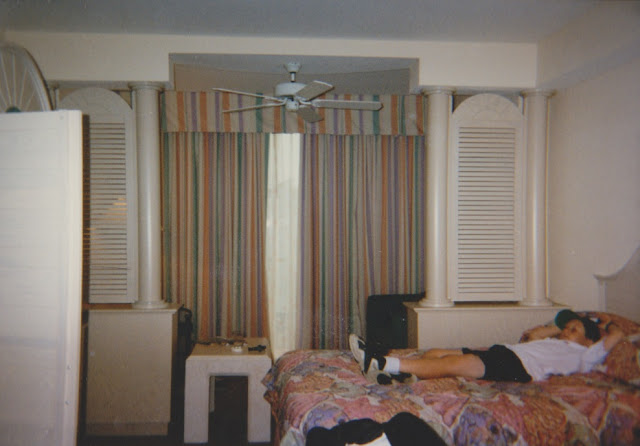 This is the room we stayed in (Roger is kicking back on the bed). The Royal Plaza hotel located near Downtown Disney. This was the first and so far only time I have ever stayed off property. 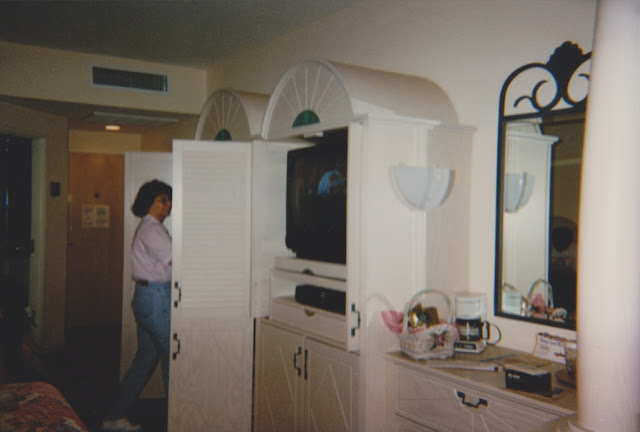 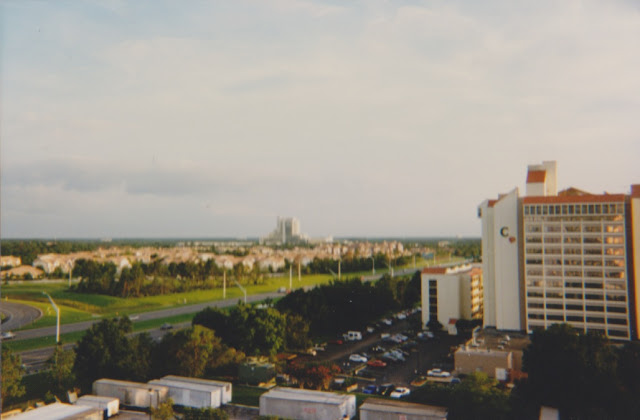 The view from our room. So far this was the first and only time I’ve stayed in a non-Disney owned hotel.
There you go. Those are my terrible pictures from my 1996 Orlando trip! I was lucky to visit WDW when I did. I got to experience several long gone attractions and got to see Epcot’s original Future World mostly complete, including Horizons and Wonders of Life (the only original pavilion that was closed was World of Motion due to Test Track construction).
More posts with items from my 1996 trip:
1996 Walt Disney World Vacation Brochure Part 1
1996 Walt Disney World Vacation Brochure Part 2
Disney MGM Studios Guide Map from 1996