1991 looks like it would have been a great time to visit EPCOT Center. Most, if not all, of the opening day attractions are still around, as are all of the “phase 2” attractions like The Living Seas and Horizons. With the park being less than 10 years old at this time it was probably still in beautiful shape in its designed glory. From a pure aesthetic stand point the park appeared as it’s creators intended it to be, a far cry from today’s ODV, Pin Trading, character meet and greet,  and Disney Vacation Club kiosks that litter the current grounds of Epcot.

I’d also like to add that this map is beautiful. It is filled with full color pictures and printed on nice thick paper. This got me to thinking, why shouldn’t theme park maps be high quality like this? You are paying a premium price to get into these places. Disney is certainly not the only park guilty of this. But that is a discussion for another time, on to the map!

The front of the map features a image of the now extinct attraction Body Wars. I said this in my last update but it is worth repeating. At one point Body Wars was Epcot’s most popular attraction. It closed forever (without replacement) in 2007.

This simple page shows the EPCOT Center mission statement along with descriptions of Future World and World Showcase. This is another thing the current guide maps could use! 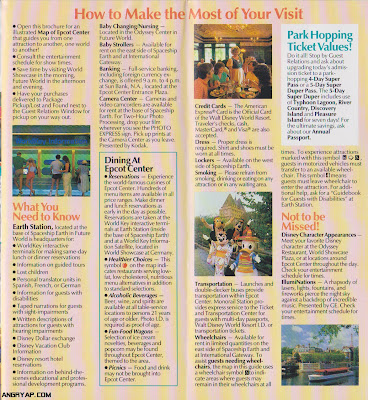 Trips to Walt Disney World were much easier in 1991. You didn’t have to make dining reservations 6 months in advance! The World Key kiosks were also in full effect back then. I’ve heard that the World Key machines are still in Epcot behind ply wood in there original locations. I wonder what would happen if you booted them up. 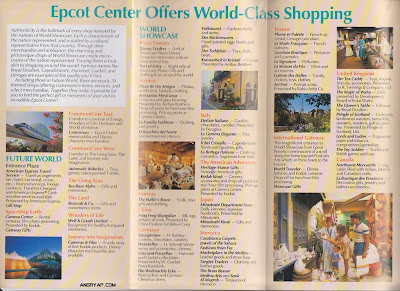 This page lists every single shop that can be found in Epcot. Take a look at the picture of the INSANE looking trolls from inside the Norway shop. 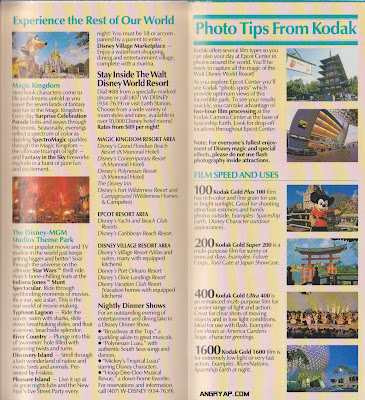 Useful photography tips can be found on the right side while general WDW info is on the left. The Disney-MGM Studios was just a few years old at this point, and Magic Kingdom was advertising its brand new night time parade SpectroMagic.
ProTip: SpectroMagic lasted 19 years at Magic Kingdom in Walt Disney World. It was replaced in 2010 by the parade that was retired for SpectroMagic, the Main Street Electrical Parade.
Something interesting on this page, notice it says “Stay Inside The Walt Disney World Resort. Rates from $89 per night” Surprisingly you can still visit during most times of the year and get a Value Resort hotel room for this price! 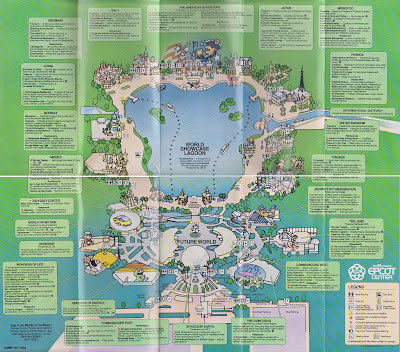 Click to enlarge or –
Download the extra large version of this map – 3.69 MB (Please, right click > save as)
This is how Epcot appeared back in 1991. Like I said earlier, all the classics are here. Every single pavilion in Future World has been completely changed or demolished entirely. The least changed is the classic Spaceship Earth, it has had several narration changes and scenes added and removed but overall the attraction is basically the same.

It wouldn’t be the back page of a Disney guide map without the advertisement for Kodak. Can you imagine if these ever went away? It would be so weird! Some day I will have to post all of the different Kodak guide map advertisements I can find in one post.