The best thing about having a blog that features rare/worthless Disney theme park items is taking them out of the box they have been sitting in for the last 15 years so they can be enjoyed by people you’ve never met on the internet! Here is one of those items, the 1996 Walt Disney World vacation brochure!

Note: There is too much awesome-ness in this brochure for one update so I will be posting part 2 tomorrow.

The front of the guide features the slogan “Make the dream come true” which is obviously different than the current slogan “Where dreams come true” Who knows how many other variations his has had over the years. 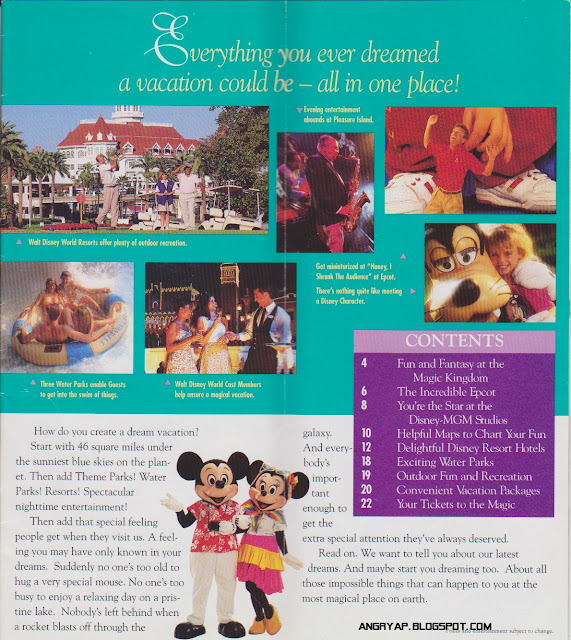 I hate that Honey I Shrunk the Audience is featured on the first page of the brochure. Was this attraction ever popular in Walt Disney World because it certainly never was in Disneyland? Also notice early 90’s vacation Mickey and Minnie at the bottom.
ProTip: Minnie’s mother’s name was Margie Mouse. 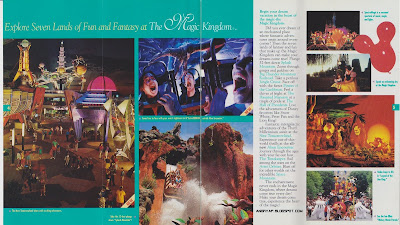 (Click to enlarge)
There is a lot of good stuff on this page. The “New Tomorrowland” when it was only a couple of years old and still had two amazing attractions that have since been unfortunately retired in favor of terrible ones (Alien Encounter for Stich’s Great Escape and Timekeeper for Monsters Inc Laugh Floor). The Mickey Mania Parade and Legend of the Lion King are both long gone. Also featured is Spectro Magic which has been on hiatus for almost a year. 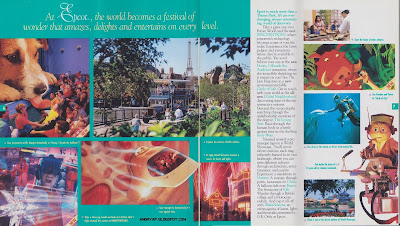 (Click to enlarge)
A lot of extinct attractions appear on this page. HISTA has been replaced by Captain EO, Body Wars abd Cranium Command are gone, and The Seas with Nemo and Friends is still known by it’s original name, The Living Seas. Also appearing is the World Showcase double-decker bus which I heard hasn’t operated in ages.
Come back tomorrow for the rest of the 1996 Walt Disney World vacation brochure!