This was obviously a slow day in Walt’s park. Low operating hours, no Fantasmic, no Fireworks. It did have 2 performances of Cruisin’ the Kingdom parade, which wasn’t that bad for a parade. If you don’t remember Cruisin’ the Kingdom, it is on YouTube. Think of it as an early version of the Disney Stars and Motor Cars parade from Disney’s Hollywood Studios that ran up until a few years ago. The only thing I vividly remember about it as a child was the giant Goofy head school bus at the end. 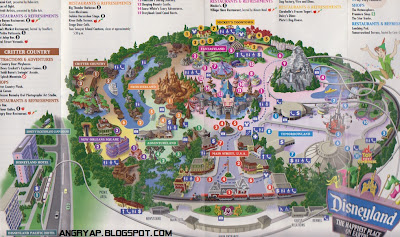 (click to enlarge)
How great is the old artwork for these mid 90s park maps? Indiana Jones Adventure is present on this map, it had been open for about 8 months at this point. Unfortunately missing is my childhood favorite the Peoplemover.
Just by looking at this map you can see a ton of differences. Notice that this is pre-Festival Arena days in Frontierland, the original Subs are still intact, Circle Vision is open, Fantasyland stage is still known as Videopolis, the Country Bear Jamboree is still around, and there are still two separate Autopias (although I can’t remember the last time the Fantasyland Autopia had operated). Captain EO is still thrilling guests at this point with a little over a year left of it’s original run, little did we know that one of the worst attractions in Disney history would replace it. The biggest difference on this map is the Toy Story Fun House located in Tomorrowland. If you don’t remember that cheap travesty you’re not missing much.

Here we have the back of the map featuring the Kodak advertisement that has been on the back of Disneyland park maps for as long as I remember (in different updated versions, obviously).